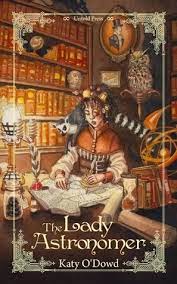 I received this book from the author, in exchange for an honest review.

Lucretia shares her time between hat making and star gazing, living with her equally inventive and talented brothers. When they are tasked with the building of a huge telescope by none other than the king, Lucretia finds herself spirited away at the royal court, where intrigue and danger await her…

It’s a delightful story that stands on the dividing line between YA and something younger children would love very much: not my cup of tea – not by a long way – but I must say up front that the feather-like hand with which the story is written, and the amused smile that peeks out of the lines will not fail to reach the book’s younger audience and at the same time captivate the soul of any adult reading it to them, because both elements will speak clearly to the child still lurking inside.

My own “inner child” seems to have gone AWOL some time ago, unfortunately, so I could not appreciate the story as it deserved: nonetheless I believe I can recommend it for its intended audience, because it will deliver all of its promises.

The tone and narrative voice, coupled with the presence of sentient animals and interacting mechanical toys, give The Lady Astronomer the distinct flavor of a bedtime story, one that’s full of wonders like mechanical pigs, suits of armor that act as royal butlers and a set of working dwarves that offer a more than passing wink to the Snow White legend.

Unfortunately, the same reasons that make this book a perfect fairytale are the same ones that prevented me from fully enjoying it: first, it’s more like a series of sketches than an organically developed story, and characters are pictured through dialogue rather than examined in depth – and it’s often a dialogue carried in breathless, overlapping sentences, that leave little room to delve to a satisfactory depth into characters, and what makes them tick, so that it was quite difficult for me to form a connection with them as a reader.

And then there was my major nitpick, i.e. the author’s choice of using a surname’s initial when mentioning a person: it felt just quirky at first, but then the excessive use of it skirted the middle ground between bothersome and annoying. I understand it might have been the norm for that time period, but to my ears it sounded contrived – and a bit too much.

Nonetheless, the story is pleasant and – of course – in the end good triumphs and the evil-doers get their rightful punishment, so if you are looking for a story to read to your kids, one that will leave them with a good feeling, this will be the right choice.