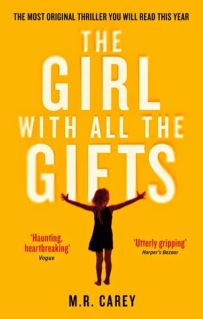 Horror is indeed a delicate medium to work with: the slightest misstep in storytelling can tip the balance either into unadulterated blood-and-gore or into grotesque mockery. This is not the case, not by a long shot, and I’m in awe of M.R. Carey’s ability to spin such a deep tale of love and discovery out of a quite horrifying premise.

Melanie is a ten year old, very gifted girl whose admiration for her favorite teacher Ms. Justineau knows no bounds: the woman has enthralled Melanie with ancient myths and stories of the outside world the little girl has never seen. Yes, because Melanie and her classmates live in an underground complex, kept in cells when school is not on, and brought to class securely bound in wheelchairs…   It does not take the reader long to perceive the truth about the situation: the world has fallen prey to an epidemic that turns people into zombies, and the children of Melanie’s class are test subjects in the search for a cure, because although infected, they are still capable of thought, reasoning, learning.  When all hell breaks loose, this special child will embark on a “hero’s journey” that will require from her a very difficult balance between mindless instincts, willpower and the deep love she feels for her teacher.

I don’t dare reveal more about this story, because it would be a huge disservice to any potential readers: even though tropes like massive pandemics, the zombie apocalypse and the crossing of a survivor group through devastated lands have been often employed, M.R. Carey managed to weave them into new shapes while creating an engrossing tale that is both a coming-of-age story and an exploration of the human soul.

The focus is of course on Melanie – the girl with all the gifts, or Pandora, a name with several layers of meaning here – but the story is also told through different points of view, keeping it both lively and multi-faceted: besides the main protagonist there are Ms. Justineau, teacher and mother figure whose strong feelings for Melanie trespass the boundaries of her assigned task and have their roots into a past tragedy; Sergeant Parks, hardened and cynical soldier who sees Melanie only as a “hungry” (the book’s name for the zombies) and not a child; Dr. Caldwell, single-minded scientist in search of a cure at any cost; Private Gallagher, born after the Collapse, a mixture of violated innocence and hero worship for Parks.  These brief descriptions might sound like well-known and well-used character traits, but in the course of the book they are often turned into unexpected directions, and can reserve a few surprises, because the author is quite skilled in delivering sudden twists and turns to his narrative.  One such example is the origin of the infection, the crossing of the species boundaries by a kind of fungus, Ophiocordyceps, that usually attacks ants, taking hold of their nervous system so that the ants are literally compelled to move away from their grounds until they reach a more suitable location for the fungus, that then proceeds to grow from the doomed ant’s body.  One of the most horrifying sections of the book is the description of the next level of fungal propagation from the hapless hosts to the larger environment, an image that will certainly haunt my imagination for a long time.

Young Melanie, the protagonist, is indeed an innocent in more ways than one: all she knows of the outside world comes from books and the reader understands soon enough that her ignorance of the real state of things settles a further layer of innocence around her – and yet there is a core of maturity to this child that takes hold of her actions, once she and the others are forced to leave the dubious security of the army base, and ultimately brings her into a leading role of sorts.  The world outside belongs to the infected, and Melanie finds herself in the unique position of being a go-between or a last line of defense for the handful of surviving adults: the calm, accepting way in which she deals with her nature, and what’s more important the maturity with which she finds a middle ground between nature and nurture, make her a compelling character, one that stands out in sharp detail.

For this very reason I was able to accept the unexpected ending, one that feels both terrifying and right: like the titular Pandora, Melanie does ultimately open the mythical vase and unleash its contents, but at the same time the book’s ending brings a glimmer of hope for the future. A very changed future, granted, but one that promises to be peopled by much more than mindless, fungus-driven specters.

A brilliant, powerful ending for a book that will remain with me for a long time – one that I can’t recommend enough, even if your reading tastes are far from this genre: I promise that it will surprise you in many ways, and touch you deeply.