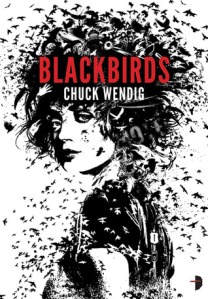 I became aware of this book through the recommendation of a friend, who also advised me to read the author’s blog: captivated by the cheerful irreverence of Chuck Wendig’s blogging style, and on the strength of past successful recommendations from this particular friend, I bought Blackbirds and started reading it straight away.  Unfortunately, what we jokingly refer to as the “great minds think alike rule” did not work its magic this time…

The premise is a fascinating one: Miriam Black can see how and when people will die, just by touching them. It’s both a gift and a curse, because there’s no amount of prior knowledge that can help her prevent a person’s death, especially when it’s a violent one: Miriam knows that all too well, because she tried. And failed.  This transformed her into an aimless drifter and at the same time an unwilling harbinger of death, taking its toll on an already dysfunctional personality: from the very first meeting she comes across as a foul-mouthed, cynical creature who resorts to living off what she can scavenge from those doomed people, a detail that I found somewhat repulsive but was ready to overlook to see where the story led me.

Despite the interesting premise and a promising beginning, though, this book did not work for me, because I can take just that much grimness, and hopelessness; I can tolerate a certain amount of gratuitous profanity when it’s necessary to the development of the story and characters; I can accept a character’s journey into hell if it’s a means to an end and not just the end itself. But Blackbirds felt way too forced in that respect, and more like an authorial exercise in shocking themes rather than an actual story.

Miriam Black looks to me like an empty vessel, totally devoid of motivations or drives; a sketch rather than a person, an endless source of apathetic musings expressed in the foulest possible language that after a while becomes annoying instead of darkly humorous – if that was the author’s intention, of course. Miriam lets things happen to her, accepting everything with a sort of detached nonchalance that goes beyond a human mind’s attempt to shield itself from pain.  This character wallows in degradation, actively seeks it and appears to forsake every right to dignity, every chance at redemption.  If, on one side, I do enjoy flawed characters very much, on the other I like to see in them some hidden strength, some drive to escape whatever the world dishes out at them, even if they ultimately fail: Miriam does the opposite, allowing fate’s currents to carry her on with mindless abandon.   Of course she’s scarred by this unwanted “gift”; of course life has been far from kind to her (as the regular flash-backs show); of course she feels the terrible burden of the countless deaths she’s forced to witness. Still, I would have liked Miriam to be something more than a disinterested spectator of her own life: the book sometimes stops at “intermission” chapters where she tells her life story to a young man who’s interviewing her, and this led me to hope that she might find some sort of balance in the future – a future where she would be able to look more clearly at her past self, understanding if not accepting what makes her different. Not long after the midway point I was deprived of this tiny glimmer of hope by the abrupt and senseless conclusion of this narrative thread.

The other characters fare just as poorly: the world described by Chuck Wendig is a dark, degraded one – granted, most of the action takes place in truck stops and seedy motels, which indeed makes for a grim background, and yet my perception was that the rest of humanity shared the same fate.  The people Miriam meets in her peregrinations are either as lost and uncaring as she is, or merciless exploiters – sometimes a combination of both – and the few vaguely positive characters, like trucker Louis for whom Miriam feels a sort of remote attraction, are too paper-thin to make an actual impression.   Chief villain Ingersoll and his two henchmen (or rather henchman and henchwoman), an ill-assorted couple of cold-blooded killers, are nothing more than one-dimensional baddies with no apparent reason for being there than to pursue Miriam and her companions.

Which leads me to my biggest contention with this book: the portrayal of female characters. Besides Miriam, there are only two others: Harriet the paid assassin, and Miriam’s mother, who appears only in the protagonist’s flashbacks. The former is a small, mean creature who seems to enjoy inflicting pain as a form of retribution for the grief from a bad marriage: it’s possible that more is explained past the point where I stopped reading, but what little I gathered was quite unpalatable. Miriam’s mother is described as a fanatically religious woman, who kept her daughter under a tight leash only to relent a little when she got herself pregnant, though still being prone to extremes of behavior. Not one of these scarce female figures in a mostly masculine background is presented in a positive light, and that, sadly, was another nail in a quickly building proverbial coffin.

All these details are wrapped up in a grim, gritty tale liberally laced with profanity: I’m not squeamish nor a prude, and I can accept a peppering of foul language when the situation and the characters require it, but Blackbirds goes well beyond that limit. I now understand that what I found amusing and irreverent in Chuck Wendig’s blog posts, enough to compel me to try one of his novels, derived its appeal from the very briefness of such posts, while in book form it all mutates into a teenager-ish fascination with grossness for its own sake, and as such it becomes repetitive and tiresome, burying what little story there is under an avalanche of potty-mouthed expletives and truly disgusting metaphors.

At some point, reading on became a struggle and I had to give up.