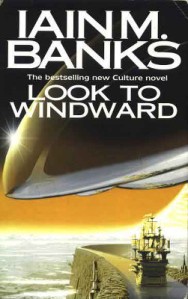 My third journey into Iain Banks’ universe proved to be a very satisfactory read, if a sometimes meandering one, and it strengthened the conviction that this is an author I must keep exploring. In previous books the Culture, the galaxy-spanning enlightened society that features in most of Banks’ works, was portrayed as a subtle and stealthy meddler in other civilizations’ development; here we are presented with some of the disastrous results of that meddling.

800 years previously, the devastating war between the Culture and the Idirans caused widespread destruction and death: one of the outcomes of that conflict was the annihilation of two stars and their Orbitals (massive ring-like habitats) to prevent their capture by the Idirans. The light of those twin explosions is now reaching the Orbital of Masaq and will prominently feature in the celebrations to commemorate the war’s victims, accompanied by a new symphony from the self-exiled Chelgrian composer Ziller. The Chelgrians, a felinoid race based on a strict caste system, are in their turn the victims of a past miscalculation from the Culture: in facilitating the rise of a lower-caste leader with the hope of a more balanced society, the Culture opened the door to a bloody civil war in which old resentments played a terrible part.  Now, on the eve of the appearance of the Twin Novae, a former military-turned-monk, Major Quilan, is en route to Masaq to ask Ziller to return home, or rather this is the cover he employs to mask his real objective: a devastating act of destruction against the Orbital in retaliation for the Culture’s dreadful blunder.  From a relatively slow start, with several detours where the characters engage in prolonged discussions of various nature, the story gathers momentum with the question of whether Quilan will succeed in his plan, gaining in intensity until the unexpected but satisfying conclusion.

This double theme of mistakes coming back to haunt their perpetrators represents the main driving force of Look to Windward: the Twin Novae have somewhat lost their destructive connotation, approaching as they are as a light show to be enjoyed, even in wistful remembrance, while Quilan’s mission of revenge is a clear and present danger masked as an ambassadorial envoy.  There is a wide range of feelings being explored here, and they are very human feelings despite the alien nature of the majority of characters: this is one of the fascinating sides of this book, that these alien creatures can be such a good mirror of our human emotions, and frailties.

The “alien” point of view rules here and the question of its adequacy, in the face of the predominantly human way it’s expressed, becomes a moot point, in my opinion, when one considers that even the humans present on the scene are very different from us: Culture humans might look like us (unless they have chosen weird body modifications), but their thought processes and feelings, the way they face life and relationships, are so different – so alien – from our present-day customs that these humans feel like aliens themselves.  Once I accepted this, I was able to enjoy the well-portrayed range of emotions from the main characters, especially Quilan: it’s fascinating to observe the degree of sympathy he creates in a reader, despite his role in the story.  The civil war that tore Chel apart, and that was stopped in its tracks by the Culture’s shame-faced admission of their own involvement, caused the death of Quilan’s beloved wife, Worosei: the flash-backs he experiences about their shared past, the poignant sadness of his loneliness and inability to move forward from the loss, lead the reader to compassion, especially when one realizes that Quilan and his pain are being used and manipulated by a Chelgrian faction bent on bloody revenge on the basis of an ancient religious code.

Quilan lost everything in the war: his wife, most of his body (regrown after his miraculous rescue) and the will to live, this last compounded by a deep survivor’s guilt. Despite this, he does not contemplate suicide, because what he wants is for his death to have meaning, to serve something bigger than himself. For this reason it’s quite easy for the revenge-bent faction to recruit him for the one-way assignment to Masaq, and yet we see him slowly begin to doubt the rightfulness of the mission and the true significance of such an act.  I believe this is the main reason for the sympathy I felt for this character, that despite his grief and his search for oblivion he still retains the basic decency of thinking about others, and the consequences of his act.  Because, when all is said and done, this is a story about consequences…

The other character that stood out for me is that of Hub, the artificial Mind running the Orbital: as other Culture Minds, Masaq’s Hub sports an interesting personality that – again – comes across as very human, despite its totally non-human and non-biological nature.  It’s through interaction with various other characters (either as the disembodied voice of the Orbital’s Mind or as the Hub’s silver-hued avatar) that its personality is layered and defined: unlike other AIs I previously encountered, especially the ubiquitous sentient drones, Hub does not exhibit any forceful or mischievous inclinations, rather coming across as wistfully thoughtful, as shown in his approval of Ziller’s new symphony’s title, “The Light of Past Mistakes”.   It’s through Hub that the dangerous situation is resolved, with a choice that is both elegant and emotionally satisfying – even moving, as far as I’m concerned.

Where the book falters, in my opinion, is the very end, where we witness the harsh retribution visited by the Culture on the Chelgrian organizers of the attack on the Orbital.  Throughout the book the concept that you don’t mess with the Culture is stressed several times, and if I can accept that even a deceptively peaceful society like the Culture would not let such an attempt go unaddressed, the gratuitous, gory violence of the epilogue robs the book of what I thought was a graceful, lyrical and balanced ending.

Still, I consider this a wonderful read, one that encourages me to explore more of Iain Banks’ works.