Tough Traveling is an interesting and thought-provoking meme started by Nathan @ Fantasy Review Barn: each week Nathan chooses a topic from The Tough Guide to Fantasyland, by Diana Wynn Jones, and challenges everyone to come up with a list of books featuring that trope.

This week we look at DEAD GODS

Fantasyland had gods, right?  And now they are dead.  Dead Gods are not forgotten though, often they are still just influential to the land as they were when living.

There is nothing more terrifying, as far as god-like beings are concerned, than the pantheon envisioned by H.P. Lovecraft: his Old Ones, who ruled the Earth in ancient, forgotten times, and who at present seem to have succumbed to a death-like sleep, never cared for humanity, its destiny or the calamities visited upon mankind.  They are not gods in the strictest sense of the word, but rather extraterrestrial or extra-dimensional beings, often remote, distantly cruel and unfeeling, which makes them even more frightening than actively evil creatures.  Some humans chose to worship them, mistaking them for gods and creating weird and terrifying cults around them: these people wait – and pray – for the Old Ones’ release from their slumber and the advent of a new age of chaos. 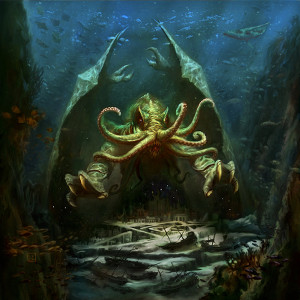 The most (in)famous is CTHULHU, a god from a different dimension: a water-bound creature, roughly humanoid but also many-tentacled and greenish in color. Huge and powerful, he’s said to be in telepathic communication with his worshippers/priests even though he’s asleep in the depths of the subterranean city of R’yleth. His followers believe he will one day rise from his slumber and retake the rule of Earth, annihilating everything that’s good and wholesome: only a spell from the Necronomicon, the lost book of dark lore that Lovecraft often quotes, might have the power to stop him. 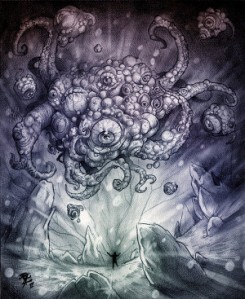 Another name frequently mentioned in Lovecraftian lore is that of YOG-SOTHOT, the Lurker in the Threshold: appearing like a collection of glowing spheres, he’s said to know and see all, even though he’s confined outside of our space-time continuum. This god’s infinite knowledge lends him a deep wisdom, but humans trying to learn his secrets, to the point they’re ready to sacrifice other people to Yog-Sothot to appease him, never end well. Hardly surprising… 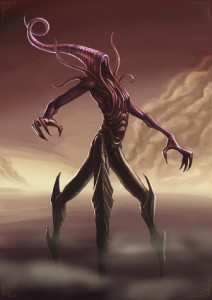 NYARLATHOTEP goes by the moniker “The Crawling Chaos” and is known for his evil disposition and the fact that, unlike his brethren, he still walks the Earth wearing a human being’s appearance.  Deception and manipulation are his preferred tools, as is misdirection: contrary to the other gods, who are supremely indifferent to the fate of the human race, he has an active – if evil – interest in their affairs. 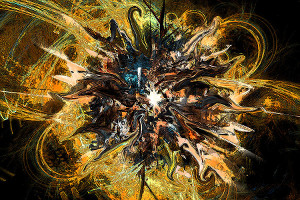 Less known, but not less powerful or dangerous is AZATHOT: his other names are Demon Sultan or Blind Idiot God – this latter probably comes from his un-intentional creation of the universe at whose center he sits, looking like a churning mass of tentacles of enormous size.

With these creatures I needed images that would render justice to H.P. Lovecraft’s imagination, so I turned to Deviantart, a place of rich and amazing creativity.

Cthulhu is a creation of FANTASIO

Nyarlathotep is a creation of ERKANERTURK

Azathoth is a creation of XLEGENDARIUMX

My thanks to all of them for the beautiful art I found on their pages.