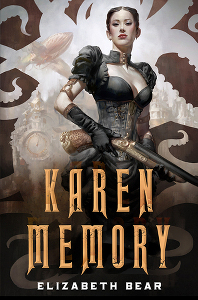 Karen Memery is one of Madame Damnable’s “seamstresses” working out of the Hotel Mon Cherie – in other words, she practices the oldest profession in the world, paying a “sewing tax” to the Rapid City municipality to be allowed this… privilege, a dichotomy that shows the ambivalent attitude of the city’s officials toward prostitution, something to be publicly condemned but privately enjoyed.    One night, the quiet of the after-hours relax at the Hotel is broken by the arrival of two fugitives: Pryia, an Indian girl freshly escaped from the clutches of Peter Bantle, owner of crib brothels where women are treated worse than slaves, and often kept there against their will, and Merry Lee, the bold runner of a sort of Underground Railroad for such unfortunates.

When Bantle and his goons try to take their prisoner back by force they encounter Madam Damnable’s resistance and that of her charges: despite Bantle’s use of a peculiar electrified glove that seems to bend a victim to its user’s will, the girls manage to repel the assailants, thus giving way to open hostilities. What until that moment has been just professional rivalry turns into an all-out war, compounded by Bantle’s design to be elected Mayor, a string of vicious murders targeting streetwalkers and a slowly unfolding plot that also points at a planned takeover from a foreign nation.

The cast is completed by Marshal Bass Reeves, in pursuit of the serial killer across the country, and by his Native American deputy Tomoatooah: they forge an alliance with Madame against Bantle, who might be sheltering the murderer and still holds Pryia’s sister prisoner in his hellish bordello. On the background of this dangerous confrontation lies Rapid City, a Pacific Northwest port and one of the last civilized places before the wilderness of Klondike, where the hopeful swarm in search of riches; the narrative is further enhanced by an interesting array of steampunk gadgetry that goes from automated, steam-powered sewing machines to airships.

What catches the eye of the reader, though, and defines this book, is Karen Memery’s unique voice: the tone is conversational, the attitude is matter-of-fact and the speech pattern is unrefined, but these elements blend into a pleasing, fun and engrossing atmosphere that takes you straight into the story and makes it real.  Far from suffering from a “fallen angel” syndrome, Karen approaches her life with straightforwardness and down-to-Earth wisdom, and sometimes even hints at some sort of professional pride, certainly engendered by Madame’s exacting standards.  At some point she gives an interesting definition of the Hotel’s patrons: They think they want a woman, but what they really want is a flattering looking glass wearing lipstick and telling them what they want to hear – there is no criticism in her words, only the end result of observation and experience, bonded with a good dose of practicality: Karen feels no reason to be judged, so she does not judge others in return, accepting life’s different sides with the same wholesome outlook, no matter what.

It’s worth stressing the fact that the main characters in the book have something in common – they are outsiders: Madame Damnable’s girls for obvious reasons, Marshal Reeves because he’s black and his deputy a Native American, and so on. Yet they don’t act as outcasts because they draw strength and courage from the support they offer each other, and this is one of the traits that make them special and lend the story its main appeal.   The overall feeling is that of a tightly-knit group of people who are as close as family and as such face any challenge or threat that might come their way. This is also reinforced by the awareness that these individuals are defined by their personality, and the way it works within the group’s dynamics, rather than by any outward difference: for example, Bea, one of Karen’s co-workers, is black; Miss Francina is trans-gender and Karen herself is attracted to women rather than men.   What the author managed here is to portray these differences as… non differences: the characters’ diversity is just an integral part of their psychological makeup, the organic and genuine representation of people, and for this very reason it carries a far stronger message than any impassioned preaching could have achieved.

The story itself is a compelling one, piling up difficulties for the characters in a breath-stealing crescendo that often leaves you wondering about their chances for success or survival, but the biggest surprise comes at the end, in the Author’s Note: here Elizabeth Bear reveals that Madam Damnable is loosely based on the figure of Mary Ann Conklin from Seattle, who ran an establishment that was part courthouse and part bordello. On reading this detail I went in search of more information online, and discovered that Ms. Conklin’s nickname of Mother Damnable came from her extensive use of foul language (a trait the fictional Madame shares) and that she could swear fluently in several languages.  In the same way, Merry Lee owes some of her traits to several courageous women who risked everything to help others who were “exploited, enslaved and legislated against”.  Marshal Bass Reeves, on the other hand, was a real, flesh-and-blood person: born a slave in 1838, he became a free man with the abolition of slavery in 1865 and his superior detective skills helped in securing several dangerous criminals to justice.

I found all this to be as fascinating as the fictional parts of the book: the need to know more, to dig deeper into areas I knew nothing about, was indeed a bonus. A book that sparks my curiosity, and compels me to look beyond its confines, is a special one and I admire the seamless way in which Bear melded history and fantasy in a cohesive and engaging story.  This is an author I need to keep on my watch list.