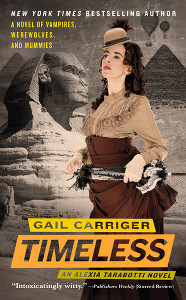 The last book in the Parasol Protectorate series is a good advertisement for the rule about leaving the game while you’re winning: the story is still strong, the characters as entertaining as ever, and many new threads hint at possible developments for the future. Yet Gail Carriger decided to consign Alexia Tarabotti Maccon & Friends to history, so to speak, letting them go to make room for new players. If it was a planned choice to avoid having the characters overstay their welcome, it was indeed a brilliant one, even though I know I will sorely miss these characters and their adventures.

The action starts a couple of years after the birth of Prudence, Alexia and Conall’s daughter and Lord Akeldama’s adopted child: Prudence turned out to be a metanatural, i.e. she can acquire, through touch, the characteristics of a supernatural creature, rendering them mortal once again – only Alexia can reverse the situation, laying hands on her child.  And this is a very spirited child indeed: we first see her as Akeldama and his drones attempt to bathe her against her will, with consequences that are both funny and worrisome – it’s no wonder that many supernaturals wanted her dead even before she was born!

I love what Carriger did with Prudence: children are not easy to handle, either in writing or cinematography, since they can come across as too adult for their years or cloyingly over-cute. Not in this case though: she hardly speaks (“no” being her preferred word, even though she can impart several layers of meaning to it…) and yet one gets the clear impression she’s an acute observer of the world, just like her mother, and that being who she is and living with such a… colorful household, she has a definite advantage over other children, as clearly evident in her dealings with Ivy’s own offspring, who are about the same age but appear less aware of their surroundings.

Alexia’s attitude toward motherhood is also refreshingly unexpected, since she applies a sort of detached, scientific view to child rearing that is not too dissimilar from the way she deals with society in general. The affection, the motherly love and protectiveness are there of course, but they are handled in the usual no-nonsense manner Alexia applies to everyone else and that has the dual benefit of keeping her in character while offering several opportunities for Carriger-style quips – like this, for example: “the infant-inconvenience had shown very little interest in the proper use of utensils, her attitude seeming to be that fingers had come first in her life, so why mess with a good thing?”.

As far as the story is concerned, the Maccons – together with the Tunstell troupe of actors – travel to Egypt at the summons of Matakara, the most ancient vampire Queen, who wants to see young Prudence. The opportunity to study the so-called “God-Breaker Plague” in its place of origin motivates Alexia and family to risk such a journey, one that will nonetheless turn out to be fraught with unsuspected dangers, not to mention serious privations like the lack of decent tea – a fate indeed worse than death. Meanwhile, in London, the Woolsey pack pursues a similar investigation and uncovers interesting and preoccupying details.  The creation of two separate narrative threads imparts a lively pace to the story, and also creates the opportunity to focus on other characters – particularly Professor Lyall and young Biffy – and to answer a few mysteries that have been crafted and slowly developed in the previous books.

Biffy in particular comes to shine in this final chapter of the series: his journey from Lord Akeldama’s favorite drone to a somewhat unwilling werewolf has not been easy, as readers saw in Book 4, but here he has reached a sort of balance, one that allows him to go beyond self-imposed boundaries and make incredible discoveries about himself and his place in the Woolsey Pack. The lost person who went about unsure of his identity has morphed into a very assertive individual, as evident in the course of a crisis brought about (not so surprisingly…) by Felicity Loontwill, Alexia’s mean and spiteful half-sister.  And his association with Professor Lyall – another favorite character of mine – is developed with a wonderful mixture of warmth and authorial affection that further enhances both characters, adding new layers to their psychological makeup. One of the best facets of this book, indeed.

Other well-known players come to the fore here, in a sort of final bow before their audience (and considering the presence of the Tunstell acting troupe, it looks quite fitting): many take unexpected turns that deepen the mystery surrounding them, instead of shedding some light on it – Floote, Alexia’s unflappable butler is a case in point – and the feeling of unfinished business this entails adds to the impression of a story that will still go on, but out of the readers’ sight.  The thread I’m most sad not to see developed is the one concerning Ivy Tunstell: no spoilers here, because it’s something that must be savored directly, but it’s such an unforeseen and amusing twist that it should deserve at least a book of its own. I wonder if this particular narrative thread will be addressed in the new series focusing on a grown-up Prudence: it’s something to set my hopes on…

There’s a quote from a returning Alexia, as she discusses the Egyptian events with Lord Akeldama, that sums perfectly the spirit of these books and this wonderful character: “A new queen, plus five Egyptian vampires and assorted drones? You object to my bringing souvenirs back from Egypt? Everyone brings back souvenirs from their travels abroad, my lord. It is the done thing.”

It’s been a fun journey, indeed.  Thank you, Ms. Carriger.