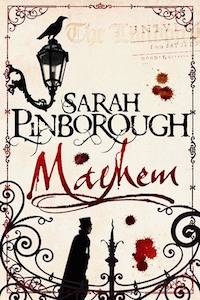 A fascinating blend of history and fiction, Mayhem takes place in London toward the end of the 19th Century, at the time when the killings attributed to Jack the Ripper crossed over with another series of gruesome crimes labelled “The Torso Murders”, so called because the killer decapitated his victims and threw their dismembered remains in the Thames.

Dr. Thomas Bond, the surgeon working for the police much as a modern crime analyst would, and (as I learned) a real-life figure, is the main point-of-view character, the only one whose thoughts are relayed in first person: I found this narrative choice both peculiar and compelling, since Dr. Bond is not the perfect, cool-minded scientist one could expect to find in this kind of story, not by a long shot.  He is delightfully human, fallible and flawed, a lonely man suffering from doubts about his own ability to face the challenge posed by this mysterious killer, and a man who feels the terrible burden of the crime scenes his work brings him to witness.

Mainly because of this, he’s prey to a constant background of anxiety that in turn generates insomnia, his constant companion in the past few months before the start of the novel: in an attempt to stave off both symptoms, Bond doses himself with laudanum and opium, indulging the latter (and growing) addiction in the most disreputable dens of London’s seedy areas. One of the main themes of the story is indeed Dr. Bond’s slow descent into hell, hammered on one side by the helplessness hanging over him and his colleagues as they remain impotent spectators of the continued carnage, and on the other by the progressive lack of necessary lucidity and coldness as the drugs and increasing fatigue start to take their toll.

Yet, it’s through his visits to opium dens that he catches sight of a peculiar figure that will have unexpected developments on the hunt for the Torso Murderer, and the creation of a strange, uneasy alliance with equally strange people who have been touched, each in his own way, by the evil that’s spreading through London.  This is the point where Mayhem departs from the fictionalization of historical events and takes a decided supernatural turn, because there is much more than “simple” human wickedness behind the horrifying chain of murders.

The mysterious priest hunting for the ancient evil and poor Aaron Kozminski (a Polish refugee from pogroms) are two sides of the same equation, the hunter and the haunted: the former giving chase all over Europe to the dreadful Upir, the creature hiding in rivers, that possesses its unfortunate victims feeding on the horror it forces them to unleash; the latter able to feel the tide of wickedness and being helpless to do anything about it, even to prevent the resulting madness from infecting his mind.  If the priest remains something of a cypher, his scant revelations adding to the enigma rather than shedding some light on it, Aaron is a more definite figure, a helpless victim of his own ability to see glimpses of the future and to feel the encroaching evil.

Dr. Bond finds himself in the middle of this peculiar dynamic, first dismissing and then accepting the priest’s information on the Upir, but never fully understanding or trusting the man’s motivations or his character, while he shows a measure of compassion for Aaron, despite the huge social and character differences, a sort of bonding born out of both men’s isolation: where Bond feels distant from his friends and co-workers because of his secret addiction and, later, for the burden of secrets tied to his mission, Aaron is disconnect from everyone, including his own family, by the intangible taint of madness and the far more tangible layers of grime he’s covered with, since he refuses to touch water, the Upir‘s natural sanctuary.

The novel develops the story from many angles, advancing it through the p.o.v. of secondary or lesser characters as well, the most poignant being the killer’s victims’: all of them women of the lower classes forced by circumstances to sell themselves on the streets, therefore becoming easy prey for the Upir‘s host, who is able to attract them with the illusory lure of money, food, or momentary comfort from their hardships.  I found that these glimpses into the times’ social structure added to the novel’s background in an interesting way, as did the excerpts from newspapers’ reports: they gave the story a realistic flavor that counterbalanced the supernatural elements quite well.

What’s more important is that this story, despite the core themes, the escalating tension and the pervasive horror, never needs to resort to gory details to engage the reader’s attention or reactions, on the contrary the dread comes rather from the soul, from the juxtaposition of the ordinary with the horrific, something that the author manages with effortless skill.

I’m certain that the second book in this series, again centered on the figure of Dr. Bond, will be equally compelling.

This is my first “offering” for READERS IMBIBING PERIL X, an event running from September 1st to October 31st, 2015.  Follow the link to learn more!