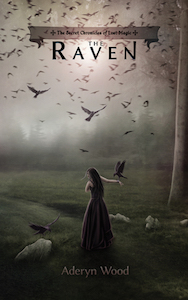 I received this book from the author, in exchange for an honest review.

When Ms. Wood contacted me about reading and reviewing her novel, I was immediately captivated by the concept of a fantasy story set in a primitive world where magic was part of everyday life: for starters it promised to be different from the usual medieval-like setting for the genre, and moreover I was always fascinated by the concept of people living in strict symbiosis with their world, to the point where occurrences like changing seasons or astronomical phenomena take a special flavor because of animistic beliefs.  The Raven is all that, and more.

Young Iluna comes into the world with a terrible stigma: her mother, whose hunter husband was killed by a wild beast, dies in childbirth, and Iluna is born on the darkest day of the year, when winter freezes the world and no light brightens it, since sun, moon and stars are absent from the sky.   The highly superstitious Wolf clan elders rule to sacrifice her to the gods, in hope of appeasement, but Soragan Izhur – the tribe’s shaman, you might call him – sees something special in her, a powerful light that indicates she’s highly gifted, and manages to spare her life. Unfortunately, this means Iluna grows up as an outcast, shunned by everyone and looked on with suspicion because of her talents.

The world-building in The Raven is quite fascinating: people live in clans named for their protective animal – wolf, bear, otter, and son on – and they meet at appointed times to renew their mutual allegiance, celebrate marriages and exchange goods, facing each time a long, harrowing journey that is however made with joy and expectation, thanks to the opportunity of visiting with old friends or long-lost relatives. Some of these clans live in caves, others build their dwellings on trees (like the Wolf clan), but they all share a faith in Ona, a sort of all-providing “great mother”, represented in the real world by the Soragans, keepers of the faith and a conduit to the Otherworld – a different plane of existence accessed through each individual’s Gift.    There are many vivid descriptions of this idyllic background, and of the fascinating ceremonies reinforcing the bonds between the various tribes, that bring this world alive under your eyes, so that it’s even more jarring when the proverbial snakes start making their appearance in this ‘paradise’.

The people of Ona can be warm and caring, but they can also be so blinded by their preconceptions and superstitions that they refuse to see what’s in front of them, and even the Soragans – who should be a source of wisdom and an example for their charges – are not immune from these very human flaw.  Even though Iluna’s gifts are apparent to everyone, her tribe rather chooses to mark her as a witch, and to keep her on the fringes of society: what’s interesting here is that she not only accepts this as her destiny, but manages to keep hold of a sense of self and dignity that’s often beyond her years.  And here is one of the details I most appreciated in this book: the depiction of young people without need for the almost-mandatory angst that’s often employed in the shaping of younger characters.

Back to the story, when danger approaches in the form of a cruel, warlike and previously unknown tribe that’s leaving a trail of death and destruction in its wake, Iluna must call forth her much-reviled powers to remove the threat to her clan, and the way the novel pans out from this moment on is somewhat surprising, but pleasantly so, and paves the way to what promises to be an interesting series.

This story is however not immune from some of what I’ve come to call my “pet peeves”: the characterization is at times somewhat sketched, though I understand that it had to give way to the basic groundwork of laying the foundations of this world; the villains are a little predictable, now and then; there’s a bit of romance that seems to happen all too quickly, and the last part of the story suffers a bit from a recurrence of details that are already known to the reader.  Yet, all of this did not detract from my enjoyment of the story, because the pacing is constant and well-timed, the writing flows very naturally and the events kept me glued to the pages, making this one the quickest reads I can remember.

The Raven comes out today (*) December 1st , and it’s the kind of book that’s indeed worth exploring, for its different approach to world-building and magic: it will not be difficult to fall under its spell…

More information at the author’s blog (*)