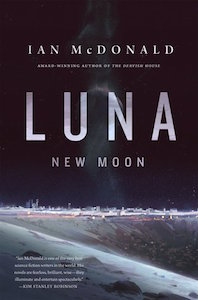 It’s become difficult for me, in recent times, to find a science fiction novel I can truly enjoy: there are exceptions of course, like the works of undiscussed masters as Iain M. Banks (just to name one), or more recent space opera series like John Scalzi’s Old Man’s War or James S.A. Corey’s The Expanse, but on the whole, new works I’ve come across are either slanted toward military sf (not my cup of tea), or rely heavily on the more romantic aspects of a story – something that holds little interest for me.

So when I came across Ian McDonald’s Luna, I was delighted to find so many of the elements I appreciate in the genre, combined in such a way as to make this novel as close to perfection as possible. The main attraction in this story is the definite sense of life in an environment that, despite technological advances, remains dangerous and hostile: to quote Heinlein’s famous title, the Moon is indeed a harsh mistress, one that requires constant vigilance and lies patiently in wait for the tiniest moment of distraction to pounce and take your life. On top of that, it changes you: microgravity affects human physiology in such a way that Earth-born individuals can live on the Moon only for short time periods before the physical alterations become irreversible, marooning them forever on its barren surface, while those who are born there don’t even have this kind of choice, since the gravity of the mother world would kill them without mercy.

These physical modifications go hand in hand with the alterations in social structure, which are nothing short of fascinating: wealth is still important in lunar society, but only as far as it ensures possession of the four elementals at the basis of everyday life – air, water, carbon and data. The first three allow you to live, and the fourth connects you to all levels of everyday interaction, from transportation to buying food: every permanent resident is fitted with a familiar, a sort of computerized avatar managing any kind of transaction, and with an eye implant monitoring the elementals’ levels. A low reading of air, for example, means you must breathe less, or run the risk or not breathing at all. Permanently.  Death, in one fashion or another, is always lurking behind your back…

If on Earth the affluent can afford to live above the rest of the world, on the Moon the reverse is true, since the closest you are to the surface, the higher are the radiation levels unfiltered by the absence of an atmosphere. And radiation, together with the damages inflicted by microgravity, can also affect the bearing of children, entrusted by those with means to surrogate mothers – or madrinhas – enrolled among the newcomers, who still possess the strongest bones and more adaptable physique of the Earth born.

On this fascinating background moves a number of very compelling characters: the Moon is ruled by five influential dynasties – or Dragons – forever locked in financial combat, made more complex by political marriages whose main purpose of creating ties between the various factions is ultimately defeated by resentment and mutual hate that run too deep to be ignored or overcome. It’s a complex and fascinating situation that in a way reminded me of the dynastic relationships in Frank Herbert’s Dune: the main focus here is on the Cortas, the relative newcomers to the Moon’s high and mighty, ruled by matriarch Adriana who handles business and family with the iron fist that’s also part of her surname. Corta Helio made its fortune by mining the precious Helium3 that provides energy and light to a resource-starved Earth, but in so doing created a powerful antagonist in Mackenzie Metals, the Cortas’ arch-enemies.

The narration alternates between present developments, that run their inevitable course toward a terrifying showdown, and Adriana’s recollections of her past life and ascent to power as the Fifth Dragon: I found myself absorbing it all through compulsive reading, the changes of scenery and point of view carrying the story forward in leaps and bounds – not unlike those of a human moving in the Moon’s feeble gravity. Adriana’s offspring are equally interesting individuals, all of them somewhat marred by their mother’s powerful presence in their lives, and at the same time strong where it counts, and ruthless as required by circumstances.  The counterpoint is given by Marina Calzaghe, a new arrival (or Jo Moonbeam, as the recent immigrants are called) and the most vivid secondary character in the book: she goes from an elemental-starved individual living at the edges of society and barely surviving by the skin of her teeth, to a prestigious position in the Corta household, where she learns that you can be mortally afraid even when you know your next breath and meal are secured.

There is so much richness in Luna, New Moon, that I find it difficult to sum it up without spoiling the contents: background and characterization are of course the supporting pillars of the story, but there is also the strong sense of a frontier world that despite its modern contrivances is still very much in the throes of evolution, and as such is not immune from some savage streak that contrasts quite strongly with the air of refinement of its outward appearance. There is no law on the Moon, and any dispute is more liable to be settled by a knife duel rather than in what passes for a court ruling, and to survive one must be as ruthless and unforgiving as this world.  This is why I was taken so much by this book, because it can blend without effort the sense of wonder of old with a more modern concept of societal evolution, economic warfare and personal conflict: I found it as compelling and mesmerizing as is the Moon itself every time I see it in the sky, and I think it quite serendipitous that I read the last pages as a full moon was on…

The only flaw?  The novel ended far too soon on a massive cliffhanger. One that I hope will not entail a long wait for the next book in the series.

As this will be my last book review for 2015, I can safely say I’m closing the year with a bang, indeed…

This post is another contribution to The 2016 Sci-Fi Experience, an event hosted by Carl  V. Anderson over at Stainless Steel Droppings (follow the links to know more!)