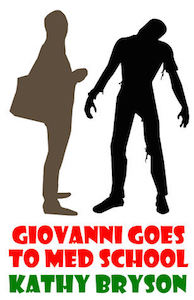 I received this story from the author in exchange for an honest review.

When Ms. Bryson contacted me about reading and reviewing this novella, I was intrigued by the strange mix of themes offered by the story: humor and zombies. Many would say that there’s very little to laugh about the walking dead, so I was more than curious to see how one of the staples of the horror genre – one that’s very much in fashion nowadays – would fare on a more light-hearted setting.

Giovanni is a young medical student in search of a part-time occupation to shore up his income, as many in his position are pressed to do, and what he ultimately finds is a night shift duty post at the hospital morgue. Our main character is a good, sensitive guy, and his worry in tackling that kind of job is more than understandable – moreover, he probably saw a good deal of B-movies that have done nothing to encourage him, especially since he keeps thinking about his family’s “loving” advice about his choice of career, one that sets both the mood of this story and makes us better understand Giovanni’s mind-frame:

The rest of their family was supportive though (…) They were all supportive. They all told him how proud they were he had gotten into med school, and how hard he’d have to study, how broke he’d be, how he couldn’t date, how he’d have no social life until he graduated, how he’d suffer through residency, and how he’d probably just get fat, grow old, and die alone.

On his very first night on the job, Giovanni must accept custody of the body of an elderly lady that passed away despite the efforts of the medical team upstairs, and even before that happened, he’s been also entrusted with the care of of said lady’s huge, slobbering dog. When in the night Mrs. Harris’ body gets up and starts walking and talking, poor Giovanni’s nightmare is only just beginning.

You will not find flesh-eating zombies here, but just an old lady who seems unable to accept her demise, and this will propel Giovanni on a very strange, mind-bending journey that seems only the first step in a longer one – at least according to what a voodoo-expert hospital orderly tells him: that Mrs. Harris’ case is not an isolated one.

Oddly humorous, filled with comedy-of-errors scenes, this short story is a quick, entertaining read that will give you a new outlook on the whole zombie scenario. And will also teach you how to deal with big dogs suffering from excess salivation. Maybe.