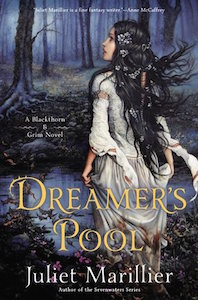 There are times when a book calls out to me with a voice that’s stronger than the others’: more often than not that voice proves to be very true. This is the case for Dreamer’s Pool: I read the enthusiastic review for the second book in this series on a fellow blogger’s post, and my “book vibes” refused to be ignored. What I found in this story is much more than I expected, starting with my instant love for the narrative and the two wonderful main characters.

Blackthorn has been imprisoned for a year for the crime of having spoken against the cruel and sadistic chieftain Mathuin, and waits for the chance of being heard and seeing justice done. In that year she has endured unspeakable torments, her only ties to sanity being her need for revenge and Grim, the man held in the cell in front of her, so that when she learns that she will not receive the justice she’s owed, but is instead slated to be executed, she falls into a pit of rage and despair.  Deliverance comes from Conmael, one of the Fae, who proposes a deal: her life and freedom in exchange for seven years as a healer – her former occupation – tending to everyone who needs her help, and postponing for that time her plans of revenge against Mathuin.   Despite the heavy price – after all desire for retribution is the only force keeping her alive, and somewhat sane – Blackthorn accepts and she reaches the realm of Dalriada, where she settles as a wise woman together with Grim, who’s followed her after their escape from prison.

The crown prince of Dalriada, Oran, has finally found the woman he wants to marry, having entertained a long correspondence with Flidais, a young lady who shares his inclinations for poetry and literature and seems like a gentle soul. Reality is however quite far from the dream, because when Flidais arrives at Winterfall for the betrothal ceremony she appears withdrawn, shallow and not a little vicious in her dealings with her future subjects. Oran’s only way to make head or tails of the situation, and avoid what he sees as a bleak future, is to enlist Blackthorn’s help in understanding what might be wrong.

The backbone of this story, although fascinating, takes second place before the wonderful characterizations and the fluid, mesmerizing writing that constitute the real magic in the novel: the tale is carried by the three characters of Blackthorn, Grim and Oran, all of them speaking in the first person and doing so with very distinctive voices, both in overall mood and speech patterns that showcase their personalities with clarity and at the same time paint a vivid picture of the speakers. Blackthorn is a very damaged soul (and we learn along the way how deep that damage goes and what kind of scars she carries) who hides her pain under a brusque façade and a fierce need for solitude: the choice of her name, which is not her real one, is indeed a warning sign for everyone not to come too close. Such traits seem to go against her work as a healer, which she carries out with a minimum of fuss and keeping emotionally distant from her patients: and yet, little by little, she is drawn into the lives of her fellow villagers and they respond to her and her ministrations with kindness and acceptance and we can see her barriers beginning to give in – grudgingly but surely.

Grim – another aptly chosen name – is a hulking fellow gifted with enormous strength that terrifies even him: he knows that loss of control (what he calls “the red”) can transform him into a dangerous creature, and there are some hints about past occurrences in which he was unable to stop himself, one of which must have been the reason for his imprisonment. Yet he is far from a brute and despite the nickname “Bonehead” he gained in prison, Grim shows over time his thoughtfulness and compassion, not to mention a deep understanding of human nature: he seldom speaks, and when he does, he uses as few words as possible, but his silences cover strong powers of observation and intuitive logic.

Blackthorn and Grim are two very improbable companions, and yet they create – with time and not without difficulties – a wonderful relationship that feels more profound exactly because it’s not openly mentioned, not despite of that: it’s not a romantic bond (which I found most refreshing) but it’s part friendship and part family tie. As Blackthorn tells Grim toward the end, they complement each other – an admission that is much more valuable and important because it’s expressed by the woman who would have preferred to live out the rest of her life isolated from any kind of contact, and yet has accepted to share her space with this lumbering hulk of a man who needs her closeness to keep his own demons at bay. Their relationship is one built on unspoken trust, on the acceptance of the other’s shortcomings and on the willingness to make room for them and work them into something positive and mutually beneficial.

In the economy of the story, the fairy-tale mystery at the heart of it all is quite straightforward and obvious – at least for the reader – but its resolution is not important: what matters here is the journey toward this resolution, and the themes explored along the way. Friendship and trust are two of them: there is an interesting counterpoint here, as we see the relationship between Blackthorn and Grim grow day by day, while the one between prince Oran and his valet – and oldtime friend – deteriorates through silences and misunderstandings after Flidais’ arrival. Trust is also quite difficult for Blackthorn, especially trust in men of power: I was fascinated by her conflicting emotions, as she compares Oran’s gentle wisdom with Mathuin’s thoughtless cruelty and struggles to give the prince the benefit of the doubt, to let herself believe that there might be men for whom justice and fairness are more than words.

Her attitude introduces another important subject, the role of women in society, and how their voice carries far less weight than men’s. Blackthorn is a case in point, of course: her imprisonment is the direct result of having taken a stand against a powerful man and his wrongdoings, and at the start of the book she is even denied the right to defend herself and bring forth her accusations – the death sentence hanging over her being the ultimate way of silencing her voice. But the narrative thread that follows young Ness’ tragedy speaks far more loudly and touches issues that transcend the fairy-tale setting of the book and are still debated in our present reality. Ness’ kidnapping and imprisonment at the hands of a man who could not take ‘no’ for an answer, who thought he had a right to exert his will on her, is tragically contemporary, as are some of the villagers’ reactions once they learn of Ness’ plight: some of them wonder if she did not “bring it on herself”, whether she did something to “encourage” her tormentor.  Sounds sadly familiar, doesn’t it?

This is a book that goes far deeper than one would imagine from its surface appearance, a book with many souls: this is the reason I was caught in its spell so deeply – Juliet Marillier just gained another enthusiastic fan.