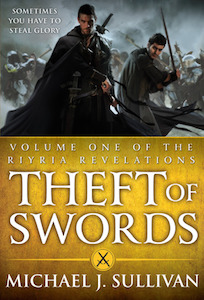 This series has been on my radar for some time now, the kind of series I keep telling myself I need to start, sooner or later, but for some reason always ends on the back burner. With the announced publication of a new series that would act as a sort of prequel to the Ryiria Revelations, I knew it was high time for me to jump on this train, and finding the first two volumes of the series in a very convenient omnibus seemed like the kind of final nudge I needed.

The Crown Conspiracy introduces the readers to the (mis)adventures of Hadrian Blackwater and Royce Melborn, two thieves-for-hire able to penetrate any location, no matter how secure, and to retrieve the objects required by their employers. For a price, of course.  A widespread fame like theirs is however bound to attract the wrong kind of attention, so that Hadrian and Royce find themselves framed for the murder of the king of Melengar as part of a multi-layered political plot to change the balance of power in the realm.  What follows is an adventurous romp through the country, with a kidnapped prince and, later, a very naive monk for company, on the run from the “bad guys” trying to capture and kill the two friends while advancing their dastardly plot.   In Avempartha, Hadrian and Royce are hired to retrieve a powerful sword that’s the only weapon able to destroy the monster preying on an unfortunate settlement of farmers.

Both stories travel on a current of adventure laced with humor and witty repartees, and peppered with characters that seem quite intent on poking fun at some of the staples of the genre: the haughty prince who badly needs an eye-opener on the realities of the realm; the strong-willed princess who nevertheless needs saving; the powerful wizard speaking in riddles (and old-fashioned language); the farm girl with a Destiny; and the required dragon.  But mostly the focus is, of course, on Hadrian and Royce, and the balance between brawn and brain they represent: Hadrian is more a man of action, a sword-wielder of great ability, while Royce is more proficient in lock-picking and in finessing their way out of trouble when needed – which means, almost always.

There are a few more serious issues explored in the books: the encroaching power of the religious faction, whose representatives are shown as dangerously manipulative; the treatment of elves, once a powerful force in the land and now reduced in virtual slavery, hunted and reviled as third-class citizens; the hints of a more enlightened past, whose higher achievements have become lost or forgotten.  All of this makes for an engaging read and the curiosity to learn more – but…

Sadly, there is a “but”: as entertaining as the story is, as entertaining as the main characters are, something feels off-track. We don’t seem to learn a great deal about the two main characters, apart from the fact they are long-time associates, work well with each other and are very good at exchanging quips even in the most dire of situations.  Moreover, much of the world’s background comes from huge chunks of “telling” as opposed to “showing”: the characters often (too often!) engage in long discussions about the past, or the current political situation, in a way that’s a bit too pedantic for my taste, and in so doing lose the momentum so far impressed to the story. The worst example of this can be found at the beginning of Avempartha, when Royce and Hadrian meet with some members of Royce’s old criminal guild: the leader of the group spends a great deal of time giving Hadrian a rundown of his friend’s past activities in the guild, with abundance of details, while the two are under the threat of physical harm. In my opinion, the unease generated by such an encounter is diluted by the conversational tone – and the overlong tale – to be as effective as it was probably meant to be.

Modern fantasy has led me to expect more from female characters, as well, and here I was less than satisfied with the offer: princess Arista looks, on the surface, like a strong-willed woman, but is soon revealed as too easily deceived (her continued blindness concerning a certain character becomes quickly irritating) and she is constantly in need of being saved, first from a false accusation of witchcraft (and a collapsing tower!) and later from being kidnapped by none less than a dragon.  Young Thrace, the peasant-girl-with-a-destiny, is almost raped before the two friends save her (insert sarcastic eye-roll), and once she’s cleaned of the grime that covers her, is revealed as startlingly beautiful, and blessed with child-like innocence.  The other woman of any relevance in the story is a whore with a heart of gold – at which I sighed heavily in despair, wondering if what I initially saw as amused fun thrown at some narrative tropes was not simply the unimaginative use of those tropes, instead.

This does not mean that I totally disliked the books, of course, to the point I’m willing to give this series another chance with the next two-volume omnibus in the hope to encounter some improvements in both characterization and narrative style: this series has received too many positive comments for me to give up on my first attempt.  But I will need to find some stronger storytelling to keep on reading…