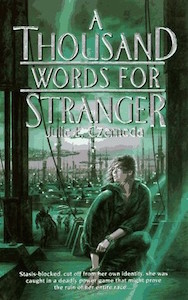 I’ve been aware of this very prolific writer’s works for some time, and I finally managed to read the first book in the Trade Pact trilogy, that’s also Julie Czerneda’s debut novel: it took me a while to understand where to start because this first trilogy is followed, in terms of publication, by a ‘prequel’ trilogy (called Stratification) and is now being complemented by a follow-up triptych named Reunification, whose title This Gulf of Time and Stars caught my attention and imagination before I understood it was not the best place to begin delving into this series.

In the future depicted by these books, humanity has spread throughout the stars and also met a wide variety of alien races, all of them coexisting – more or less – in a sort of loose alliance called the Trade Pact. Outside of this treaty-like convention stand the Clan, a group of aliens who look perfectly human but are set aside by their mental powers: telepathy, teleportation, telekinesis, and who knows what else, since they are not very forthcoming about their gifts, and look with barely concealed disdain on those they consider their inferiors.

At the start of the novel, two members of the Clan are attacked near the spaceport on the planet Auord: the man is left unconscious on the ground, while the woman – whose name we’ll later learn is Sira – manages to escape.  Sira has no memory of who or what she is, the only thoughts in her mind generated by a strong, inexplicable compulsion to find a ship and leave the planet: when she accidentally meets Captain Jason Morgan, of the independent trader ship Silver Fox, she knows he’s the right person to accomplish what the voices in her mind urge her to do and she manages to be signed on as crew on the Fox.

I have to admit that at this point the story looked to me like a classic romance novel in a space-opera setting, and that I started to feel some disappointment, but since I did enjoy the writing I decided to stay onboard – so to speak – and see where this particular ship was going to take me: now I’m happy I did, because the story took me in quite unexpected directions, and it was far from predictable or trope-heavy.  True, there are some romantic overtones in the narrative (something I usually try to avoid), but they are dealt with a light hand and do not excessively intrude into what turned out to be a complex plan (the kind where boxes hide within boxes) to sidestep the dangerous path where the Clan’s method for propagating its species seems headed.

The main focus largely remains on Sira and her literal discovery of herself as she tries to make head or tails of her identity, her past and the strange abilities that surface in the most unexpected moments: what I particularly enjoyed in her story is the fact that despite the loss of memory and the apparent helplessness, Sira is not a passive victim of events, nor is she the proverbial vulnerable heroine waiting for the equally proverbial hero to save her. On the contrary, she’s often able to save herself, to tap an inner core of resourcefulness that enables her to overcome the problem at hand, or to wait for the best opportunity to do so, even in the direst of circumstances.   And once that past does surface, the dichotomy between what she was before the amnesia and the person she’s become since then, the person that was born on that night on Auord, makes for a very interesting dilemma, one that helps to shape the character’s personality.

This journey of discovery also serves the purpose of explaining the nature of the Clan, the way they evolved as a race (although on this subject we are given only tantalizing glimpses) and how their mind-set and customs reached the present configuration: if it’s true that there is a downside to every form of power, the Clan’s own brand of it is a huge one, the kind that could bring them to extinction if given enough time.  It’s a very elegant way of counterbalancing such amazing abilities that would otherwise have made these people less believable: the fact that their own demise, as a race, could be the direct result of a relentless pursuit of ever-increasing mental powers, makes them more approachable and, ultimately, an object of sympathy, difficult as it is considering the attitude of some of their members.

At the same time, Sira’s search of her past and identity allows the author to showcase Clan society without need for the dreaded infodump, because her discoveries are the readers’ discoveries and we learn things alongside her. In the same way, her adventures make room for a parade of alien creatures and societies that the reader encounters in a very natural way: it all becomes part of the adventure, and each new steps brings new characters on the stage while advancing the plot.  And if the villains are sometimes too… villainous and easy to hate, like the reptilian pirate Roraqk, whose stressed sibilants become too much after a while, or if the friends and allies are too easily lovable, like the strange, metallic-plate-covered Huido, all can be forgiven thanks to the swift pace of the story, and without forgetting that this is a debut novel and as such is exceptionally well written and free of the many mistakes one could expect from an emerging author.

A Thousand Words for Stranger proved to be a thoroughly enjoyable read, and an intriguing start to the series: I look forward to learning more about this universe, and I will certainly return to it as soon as possible.

8 thoughts on “Review: A THOUSAND WORDS FOR STRANGER, by Julie Czerneda (Trade Pact #1)”