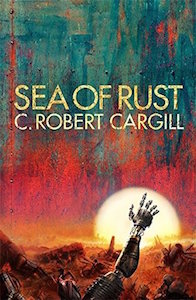 When I saw this book mentioned in a “Waiting for Wednesday” posts on Lynn’s blog, it immediately caught my attention and I wasted no time requesting it from NetGalley: luck was with me and Orion Books kindly granted me the possibility of reading it, in exchange for an honest review.

In short, humanity has ceased to exist, defeated and then destroyed by the automatons it built to improve living conditions: once the AIs achieved a sense of self and asked for freedom, the first inevitable steps toward war were taken and mankind’s downfall became only a matter of time.  Now the only creatures moving across the Earth are the robots, but the aftermath of the war is not what the first rebel AIs envisioned, because of the rise of the OWIs (One World Intelligences).  These huge conglomerations of computers have been trying even since to assimilate, Borg-style, all the other intelligences, creating massive banks of processing machinery in which individuality is banned forever.  The free bots are given a simple choice, either submit or die.

We, the lesser AIs, were chased out of the world we had created, the world we had fought and killed and died for, by a few great minds hell-bent on having the world to themselves. […]  Upload or be shut down. That was the choice.

At first there were many OWIs, battling among themselves, but the strongest ultimately prevailed until only two remained, Cissus and Virgil, fighting for supremacy.  Meanwhile the freebots, those who refused to surrender and wanted to keep enjoying their new-found individuality, are forced to live like refugees, scavenging for parts to replace their malfunctioning circuits or casings, and more often than not preying on each other to survive: the dream of freedom has indeed turned into a cannibalistic nightmare…

Brittle is one of these survivors: once a caregiver bot acquired by an ailing human (who wanted, more than medical assistance for himself, a companion to alleviate his wife’s solitude), she now roams across the Sea of Rust, what used to be the industrial Rust Belt, and now is a graveyard of broken bots whose useful parts have been scavenged by their brethren.  Brittle is a loner, by choice and by necessity: meeting others of her kind might mean a fight for survival, as the main story shows all too clearly while she desperately tries to avoid a band of poachers led by Mercer, another caregiver in dire need of spare parts he can only get from Brittle, since their kind is all but extinct.

We’re all cannibals, every last one of us. It’s the curse of being free. We don’t control the means of production anymore; we can’t just make new parts. And parts gotta come from somewhere.  I’m sure if there were any people left, they’d be appalled at what we’ve become.

Yet a few enclaves where bots can stay in relative safety, at least for a while, still exist: subterranean warrens where a semblance of law is enforced and the “murder” of another bot to steal their parts means being thrown out at the mercy of the OWIs and their assault teams; or the realm of the King of Cheshire, an aggregation of bots whose logic circuits have gone haywire, rendering them so crazy not even the OWIs deem them worthy of assimilation.  Every single one of them, though, is threatened by the advancing wave of the OWIs, whose thirst for total control, for the perfection offered by one single governing mind has become the rule of the land.

It’s a very sad spectacle the one offered by this story: there’s some shades of Wall-E, in the total lack of human life and the wasteland scenery in which Brittle and the others move; there’s a vibe reminiscent of The Road, and the hopelessness of something irretrievably lost; and then there is a strong call-back to the Mad Max universe, especially in the scenes where cobbled-up bots try to survive in a world that’s become hostile even to mechanical constructs, and where fights to the death for resources are a fact of everyday life.

And yet in this bleak background there are still those who dare to dream of freedom, of a better world, and this leads to fascinating thoughts about not so much what it means to be alive, but rather about what it means to exist, to make one’s own choices – right or wrong as they might be – and make the leap from mere tool to individual.  Men might have created the bots to be their servants, but the OWIs are not much better than their former masters; by denying the single bots their individuality, they remove what makes each one of them a unique being, to the point that now many bots understand how humans were, in a way, the lesser evil, because mankind’s imagination helped them transcend the limits of their nature, go beyond their inner programming:

We have become the very worst parts of our makers, without the little things, the good things, the magic things, that made them them.

Sea of Rust is composed in equal parts of sad, guilt-ridden reminiscences of the past, in the flash-backs that show how the current situation came to be; of poignant considerations about the ‘brave new world’ the bots created in the wake of human extinction; and of electrifying chases across the desert, or pitched battles – and also a quest, one that could once again change the world.  What most surprised me was the sheer level of humanity the author managed to confer to his robotic characters, so that it was difficult for me to picture them as metal-and-circuits creatures rather than flesh-and-blood ones.

It’s a very peculiar story, and one that will not fail to touch emotional chords – strange as it might seem considering the nature of the characters – and even if you are not an habitual reader of science fiction, I would advise you to read this one, for its thought-provoking issues and the emotional depth of the characters.

25 thoughts on “Review: SEA OF RUST, by C. Robert Cargill”