As the start of season 7 for Game of Thrones, the TV series based on George R.R. Martin’s saga A Song of Ice and Fire, approaches – with the premiere slated for the evening of July 16th – so does the fans’ excitement to see how the story will move forward, now that the all-out war between the various warring factions is about to begin (although I will admit that I will take it all under advisement, while I wait for the next books to come out, since I’m pretty certain that GRR Martin has some surprises in store for us readers and has kept a few cards close to his chest, without revealing them to the show’s creators…)

Nonetheless, the hype is at its highest levels, and many events are being staged to keep it that way: I recently discovered that one of them has been set up here in Milan in the inner courtyard of the Sforza Castle, a 15th Century fortress located in what is now the heart of the city. Here is a brief video that will give you an idea of the location:

A few days ago I learned that a presentation of the world depicted in Martin’s saga and the HBO series would be held on this weekend, culminating in a public showing of the first episode of season 7 at 3 a.m. on Monday, July 17th, at the same time as the USA airing. Thankfully I will not have to observe such an ungodly hour to see the episode, since Sky Italy will be airing it and, as a subscriber, I will be able to record it and watch it at a more humanly convenient time 🙂

I was however curious about the presentation, my curiosity increased by the huge billboards covering the walls of the Duomo subway station I have been seeing all week long on my way to and from work, and announcing that “Winter has come”, or asking if we were “ready for it”, the more impressive one being a scene of the sword duel between Jon Snow and the King of the Others – a very impressive scene, indeed. So this morning, since I was in the area, I decided to see for myself: in truth, it looked more like a display aimed at younger audiences, especially with the big, bronze-like dragon everyone wanted to be photographed with, and the copy of the Iron Throne with a long queue of people waiting for their picture to be taken while sitting on it – and my heart went to the poor guy dressed like a Wildling standing beside the throne and looking fierce: with a 32 C temperature (that makes it close to 90F) and a 35-40% humidity, it must have been hell to stand there in such heavy clothing! 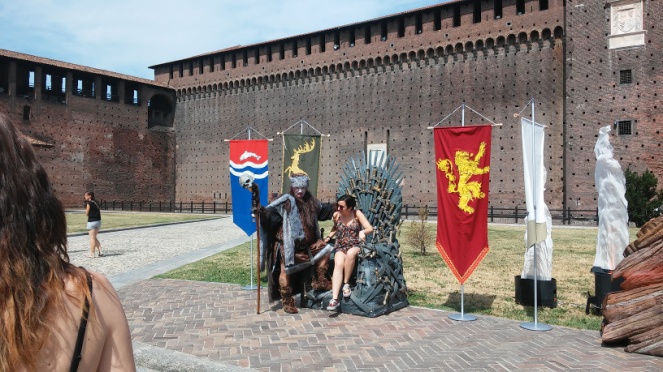 The best feature was indeed the fountain in front of the main entrance: it has been dressed to look as if part of it is frozen (after all “Winter has come”!) and despite the July mid-morning brightness it looks good. 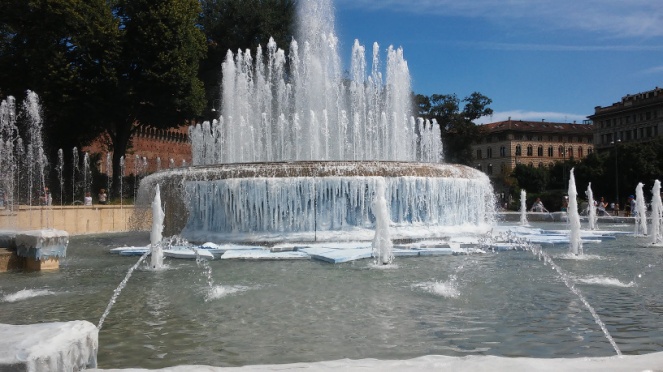 The light of day might not be the best to observe the presentation, though, and I believe that at night, with some strategically placed illumination to enhance the location and the displays (and to keep away the darkness and the terrors Melisandre is so fond of mentioning) the castle’s courtyard will take on the properly magical atmosphere required by the event. For those fortunate – or bold – enough to brave the wait until 3 a.m. on Monday morning it will certainly be an amazing experience to see the brand new episode surrounded by the ancient walls of the castle.

For the rest of us, especially those waiting with impatience to know the date of issue for The Winds of Winter, the trailer for the new season will have to be enough.

12 thoughts on “WESTEROS IN MILAN…”