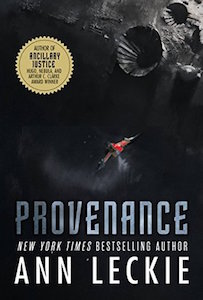 I received this novel from Orbit Books, through NetGalley, in exchange for an honest review.

When Ann Leckie’s first novel, Ancillary Justice, was published I acquired it on the strength of the enthusiastic reviews I kept reading online, but despite its brilliant premise and intriguing approach I could not bring myself to finish it because I failed to connect with both the story and the characters.  For this reason I had not paid great attention to the announcements about the coming issue of Provenance, at least until a teaser for it was appended at the end of James S.A. Corey’s latest Expanse novella, Strange Dogs.

That brief glimpse of what promised to be an exciting story, with a main character trying to smuggle off-planet a stasis box containing a body, was enough to draw my attention and I was very eager to see where that premise would take me.

Ingray is the adopted daughter of Netano Aughskold, a prominent politician on Hwae: according to Hwaean custom, people who hold power often choose to adopt parentless children and raise them as their own, while forcing them to compete in brilliance and accomplishments so that the best of them will inherit the title held by the house’s head.  While competent and motivated, Ingray has always known that her brother Danach stands better chances of winning the contest, so she concocted the plan of rescuing the famous thief (and son of one of her foster mother’s political rivals) Pahlad Budrakim from Compassionate Removal (a mix between forced labor and exile) and convincing him to reveal where he stashed the vestiges he stole from his family.  She plans on restoring them to their proper place, therefore gaining Netano’s respect and favor.

Vestiges hold enormous significance in Hwaean society, both as mementos of the past and as proof of one’s ancestors being present at important historical moments: one could say that they are at the very root of Hwaean civilization, since some of them, as becomes quite clear with the unfolding of the story, stand as proof of Hwae’s own independence and reason of being.  This is one of the most interesting aspects of Provenance, because human (or maybe even post-human?) civilization as depicted here seems to have lost any contact with its origin planet and needs to build itself a past and firm roots and does so by infusing extreme importance in what we might consider trivial objects, like a signed invitation to a party, or a ticket for a focal political event.  This is why the suspicion of forgery laid on some very important vestiges, and later on the threat of them being stolen by neighboring civilizations, is enough to throw Hwae into turmoil (as the saying goes: “Who are we if our vestiges aren’t real?”): Ingray’s daring plan, one whose failure might leave her penniless and bereft of any further opportunity, crashes indeed first on the apparent fiasco of Pahlad’s rescue, and is then further waylaid by a series of unexpected events where political intrigue mixes with murder and complex inter-species relations.

Another fascinating detail comes from gender representation – not surprising, since I remember how Ancillary Justice did that by affixing the pronoun she to every character, no matter their sex: on Hwae there are three genders – male, female and neman, which might be defined as gender fluid as indicated by the pronouns employed for them. It made for an interesting mental exercise and reading challenge, but the novel did not delve too deeply into the meaning of it, or the status and outlook of neman characters, while some other tantalizing glimpses were added, as the fact that children would choose their gender once out of puberty, and sometimes even later as we see with Ingray’s friend Taucris, who seems to have been forced to choose by family and peer pressure once the usual time limit was reached and overcome.

Again, Provenance regales us with mention of sentient AIs (which I gathered came from the trilogy started by Ancillary Justice), and of a few alien races, most notably the Geck – reclusive creatures no one has seen, since they interact with others through remotely-controlled mechs. There is a great potential for a wide, fascinating tapestry in these glimpses we are afforded, but unfortunately they remain exactly that – and this is one of the reasons I was mildly disappointed with this novel despite its intriguing beginning, although my main contention comes from a perception of insufficient characterization and weak story.

Just as it happened with Ancillary Justice, I could appreciate the unique touches the author employed to create her vision, but at the same time I could not connect with the characters or build any interest for the story unfolding under my eyes: my overall impression was that of distance, or removal – while I kept reading because I was curious to see where the whole scenario would lead me, I felt no empathy with Ingray or any of the other characters, even when some important revelation about them was offered, or when their well-being was threatened.  This might have happened because the characters themselves did not seem to care: apart from learning about their motivations, we never seem to see those motivations into play, we never see any passion in what they say or do.  To me they almost walked through their own lives as spectators rather than participants, and that robbed them of the depth and facets I always look for in a character.  Moreover, some of the events develop in a confused and confusing way that at times left me quite puzzled, even though I could not summon the will to delve further into the details and try to deepen my understanding.

This is not, however, a negative comment on Provenance, but rather my final acknowledgement that Ann Leckie’s storytelling is not to my tastes: considering the huge success of her Imperial Radch trilogy, and the first excited comments I’ve seen from her affectionate readers, this will certainly prove to be another favorite for them. Just not for me….