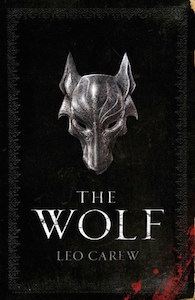 I received this novel from the publisher, in exchange for an honest review.

My luck with debut novels seems to keep holding strong, and Leo Carew’s The Wolf is the latest in this string of fortunate encounters, an epic fantasy story set in what looks like an alternate version of Britain, called Albion, where baseline humans and outlandish warrior races compete for primacy through bloody wars.

Readers are plunged straight into the midst of one of these wars, pitting the Sutherners against the Anakim, a northern tribe of veritable giants, long-lived and quite strong thanks to the inner bone plates that armor their chests: knowing that superior numbers will not be enough against the Anakim’s battle prowess, the Sutherners devise a trap that works successfully, forcing their foes into an unheard-of retreat after their leader, the Black Lord, is killed in action leaving his 18-year old son Roper in command of the army.  The defeat weighs heavily on the Anakim’s morale and gives Uvoren, the highest-placed general and a renowned hero, the opportunity to lay the blame on Roper and seize the leadership: Roper will have to learn the subtleties of politics and authority very quickly as he fights a war on two fronts – the inner one, where his clash with Uvoren fast escalates into deadly territory, and the outward one, as the Sutherners, emboldened by the recent victory, rekindle their expansionist plans.

The Wolf is a novel that satisfies both in world-building and in characterization: in the island of Albion the river Abus works as a demarcation between the Sutherners and the Anakim, the former viewing the latter as monsters, fallen angels, barbarous savages, while the Anakim see their historical opponents as weak and lacking in honor.  Both are wrong, of course, mostly because of ignorance on either side: we readers instead enjoy the opportunity to get to know them better, and to see how land and living conditions can shape a people and forge their mindset.

The South enjoys a more agreeable climate, fertile lands, and therefore its inhabitants have created a more laid-back society, but also one in need of demographics-related expansion, so they inevitably turn their gaze toward the territory of their long-time enemy and, through the old strategy of demonizing the adversary, mount a campaign of invasion, plunder and destruction with the goal of beating the Anakim into submission. The northern warriors, on the other hand, have built their society on military prowess and on a strong link with the land they dwell in, a symbiotic bond that in some cases prevents them from giving in to the invading army, choosing death rather than relinquishing their foothold.

A the heart of the Black Lands, the Anakim territory, lies the Hindrunn fortress, a massive construct of stone that no enemy could breach and inside which the Anakim seek not so much a form of security as a way of isolating themselves from the rest of the world, the microcosm in which they feel truly attuned to the land in which they live.  The glimpses we are afforded inside the Hindrunn’s walls speak of a complex, lively society that belies the Sutherners’ prejudice about the Anakim’s savagery.

On this fascinating background move some interesting figures, drawn with such skill that the main antagonists – Roper the fledgling Black Lord and Bellamus, the upstart who gained command of the Sutherner army – come across as equally sympathetic so that it’s difficult, if not impossible, to pick a favorite.     Roper is young and quite inexperienced: his father enjoys little narrative space before his demise in battle, but he seems like a harsh, unforgiving man and one not too prone on passing on some wisdom to his son.  So being both inexperienced and young, Roper initially flounders in his role as ruler of the Black Lands and risks to be easy prey to Uvoren’s power play; he rebounds quite easily though, finding a few allies and heeding any sensible advice that his directed his way.  He learns on the fly, and he’s as ready to treasure what he learns just as he’s ready to acknowledge his mistakes: as ruthless as he needs to be, he remains able to elicit the reader’s sympathy all throughout the book, growing in depth and complexity as the story progresses.

Bellamus, for his part, must struggle against his humble origins to emerge in a society that pays more attention to circumstances of birth rather than skills: his liaison with Queen Aramilla plays an important part in his ascent toward command of the Sutherner army, but he reaches the goal through sheer determination and a years-long study of the Anakim, for whom he harbors more than the interest of a military commander analyzing his adversary.  There is an uncommon form of respect, almost fascination, in Bellamus’ keen interest in all things Anakim, so that, once he realizes than despite the long years of study he only scratched the surface of this adversaries’ culture, and did not understand what the Anakim soul truly is, the ensuing frustration weighs more heavily than any defeat.

With such focus on battles and military prowess one might think there is little or no space for women in The Wolf, but although they are not exactly prominent, what we see of them in Anakim society makes for intriguing glimpses I hope will be given more space in the next novels.  While Sutherner women seem relegated in the traditional roles this medieval-like milieu allows them, Anakim women, though apparently enjoying only a supporting position in their society, are afforded more freedom and are shown repeatedly as its backbone: one of the glimpses I was talking about concerns the office of Historian, the women to whom the totally oral traditions and past of the Anakim are entrusted, since they have no written language worthy of that name; they are the holders of their people’s collective memory and so the custodians of all that makes the Anakim what they are.

And then there is Keturah, the woman Roper marries to sign a political pact and who quickly becomes his partner, his confidante and his best ally: when we first meet her we see her as quite outspoken and bold, then we slowly learn about her cunning political sense and her ability to create a web of useful relationships.  The fact that she’s universally treated with respect and even affection by her peers speaks loudly about this side of Anakim society, and is another detail that begs a deeper look.

All of the above might seem like scattered notions, and in a way they are because it’s difficult to take in all of the complexities of this novel and the story it tells, but I believe that The Wolf must be enjoyed as I did, with as little information – or preconceptions – as possible: this way it will be easier to get happily lost in this fascinating world. And to come out of it with a strong desire to know more.