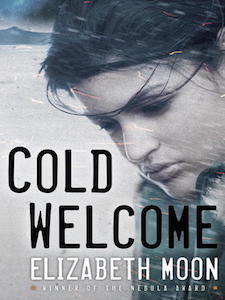 After backtracking through the five novels of Elizabeth Moon’s Vatta’s War series, I was finally able to get back to Cold Welcome, the first volume in the author’s new cycle called Vatta’s Peace, one that I started reading some time ago before realizing that I was missing too much back-story for my comfort.

Granted, one could start with Cold Welcome without undue problems – and I know many have done so – since the author leaves some well-placed signposts that help the readers orient themselves, but getting to this point after learning to know Kylara Vatta and the way she grew, as a person and as a commander, through the previous series, is a different kind of experience, a more rounded, deep-reaching one.

The book starts a few years after the events in Victory Conditions: following the decisive success against Turek’s pirates, Admiral Kylara Vatta has expanded and consolidated her Space Defense fleet, shaping it into a solid and respected organization.  Returning for the first time to her home planet at the request of her formidable Aunt Grance, Slotter Key’s Rector of Defense, Ky boards a connecting shuttle with her former Academy commander, the man who expelled her after a diplomatic incident, and from the very start something looks suspicious: the shuttle must perform unplanned course corrections due to a strong weather front, and some unexpected technical problems force the pilots to effect an emergency landing.  From that point on, all hell breaks loose and Ky finds herself and the survivors of the crash marooned in a harsh, desolated land marked as “terraforming failure” by the planetary charts.  It becomes immediately clear that the crash was the result of an act of sabotage (or rather several acts, since the perpetrators wanted to be certain of reaching their goal), so that Ky and her surviving comrades are not only fighting against tough environmental conditions – first on life rafts and then on an Arctic-like tundra – but against intentional damage on their survival gear.  Not to mention the traitor (or traitors) hidden in the group…

This is where, I believe, knowledge of the events that shaped Ky Vatta into the person we see in this novel is essential, because otherwise she might come across as a know-it-all kind of Mary Sue instead of the individual who managed to overcome a long chain of difficulties and personal losses, becoming a capable, level-headed leader.  Knowing what Ky went through in the past, first with her unjust (and very possibly contrived) expulsion from the Academy, and then as a merchanter-turned-soldier as she fought Gammis Turek’s pirates, helps in contextualizing her actions and the hard decisions she must take for the survival of the group.  Again, Moon does a good job in providing the new readers with all the necessary clues without cluttering the narrative with long exposition, but there is a great difference between being told about certain occurrences and reading them as they happen in Ky’s life, changing her outlook, shaping her personality and building some much-needed experience.

And that experience is what she and her group need, badly, in what looks like a desperate situation, worsened by some instances that appear more and more suspicious as the clues build up: the area where the shuttle crash-lands is one where surveillance satellites and communications don’t seem to work; some of the emergency supplies for the life rafts are either incomplete or damaged; and the behavior of some of the survivors doesn’t always add up. Never has Ky been so alone in her previous undertakings: before she always had a loyal crew to support her, and friends or family within reach, while now she must shape a group of strangers into a cohesive unit working together to survive, and the only known entity she can count on is her aide, a very uptight woman more focused on proper behavior and military decorum than on what really matters in such a situation. Not the best start, indeed…

The extreme conditions with which the group must deal offer a great chance for character exploration, so that the departure from the usual space opera or military SF themes one might expect leaves room for a very different kind of story, one where we can watch how people react to punishing environmental conditions and the very concrete possibility of death before any rescue can be effected. In this Moon truly excels, because she sketches the various personalities through the hardships they go through, and also manages to gift us with some surprising developments: there are a few scenes where the undercurrents of personality clashes come to the fore, and I enjoyed both the verbal skirmishes those entailed and Ky’s reactions, that were always quite collected despite the personal strain she was enduring at the moment.

If the narrative thread of the survivors is a fascinating one – especially when they make a quite unexpected discovery on a supposedly barren and uninhabited landmass – there is an equally intriguing storyline where Ky’s family and friends and the local authorities are concerned: even in the face of the grim odds presented about the survival of the shuttle passengers, Grace, Stella and the rest of the family are not ready to give up the search, so that when Rafe is able to confirm that Ky is indeed alive, thanks to their ansible connection, the Vattas resume their attempts to reach the survivors, finding several obstacles on their path.   Clearly, the recent purge has not rooted out all the rotten apples from Slotter Key’s management structure, so that Grace, Rafe & Co. need to move with quiet stealth to avoid being thwarted in their efforts.  There is a mounting sense of dread running through both narrative paths, which makes for a compelling read and a very engrossing story.

All of the above would be enough for a very satisfying read, but it’s not all one can find in Cold Welcome, because of the discovery Ky and the other survivors make in the not-so-deserted wasteland where they crashed: it’s a puzzle that will need to be unraveled (and probably the focus of the next books) and that promises to be as fraught with danger as the previous pirate chase has been.  Something I’m happily looking forward to.