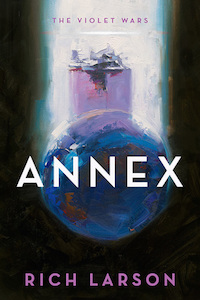 I received this novel from Orbit Books, through NetGalley, in exchange for an honest review: my thanks to both of them for this opportunity.

My previous experience with Rich Larson’s writing is limited to a short story I read some time ago, one that however left a lasting impression on me because of its lucid bleakness, so that once I learned this is his first full-length novel, I did not hesitate to see how that sharp storytelling translated into a longer work – and the answer is, very well.

As Annex opens, we readers are immediately thrown into the thick of things: a huge alien ship appeared over the city where the characters live, an image that strongly reminded me of Independence Day, and destroyed a number of buildings with a surgical attack. The surviving adults were then ‘clamped’, fixed with a neural interface connecting them to a virtual reality simulation of their normal lives, while they wander around, zombie-like. The children were rounded up and implanted with what they call a parasite embedded in their stomach, and are held in warehouses where mechanical constructs dubbed ‘whirlybirds’ keep them sedated and docile.

No other explanation is given about the aliens’ motivation or goals and that’s understandable since we witness events from the children’s point of view, and know just as little as they do: this might prove a little jarring at first, but the pace of the story is such that knowing the how and why of things matters less than the characters’ journey.  Two of them take the center stage from the very beginning: Bo is an eleven year old boy of Nigerian origins who managed to escape from one of the warehouses, driven by the need to find his older sister Lia, who was moved elsewhere by the aliens.  After his breakout, Bo meets with Violet and through her connects with a group of other escapees living in an abandoned theater and calling themselves the Lost Boys, led by teenaged Wyatt.  Violet is a transgender on the make: after the alien attack she saw the opportunity of granting herself what family and society denied her until that moment, and she’s been dosing herself with hormones to effect the desired transition.

The outside world Bo finds himself in is revealed in all its horror as he finds his place among the Lost Boys: besides the immanent presence of the ship and the accompanying gloom that prevents the sun from shining through – at some point it’s also shown that there is an impassable barrier at the city’s limits – the ruins are plagued by roving pods that look for stray children to capture and imprison in the warehouses and by the othermothers, bio-mechanical constructs that partly resemble the children’s real mothers and are built by the aliens to lure them out of hiding. Bo’s first act as a Lost Boy must be the killing of his othermother, to show that he’s disenfranchised himself from the world of adults, that his loyalties now lie only with his newfound family.

Both he and Violet were already outsiders before the invasion and this seems to make them uniquely able to survive in this changed world, and to retain a form of independence that the other kids lack, which in turn makes them easy prey for Wyatt’s manipulative skills: there is a strong parallel between Wyatt and the less idealized versions of Peter Pan, those where he looks less like the carefree boy and more like a scheming psychopath.  It’s indeed the arrival of Bo, and the discovery of the uncanny power he can wield through his parasite, that changes the dynamics among the Lost Boys and brings Wyatt’s underlying cruelty – and madness – to the surface, creating a dramatic turn of events inside an already tense situation.

What happens at that point requires some suspension of disbelief, since the children embark on a mission to fight the aliens and “save the world”, and frankly the sequence of events goes at times quite over the top, but the breakneck speed of this story, that develops in the brief space of few days, makes it easier to believe it all and to follow with growing nervousness Bo and Violet’s progress through the alien ship and the Lost Boys’ commando action against the alien invaders.

Much as I rooted for Bo and his quest to save his sister Lia, it was Violet’s journey that I found quite compelling: her status as a transgender person is an important issue and I appreciated how it was not her only defining trait but one of the facets that made her who she is. What I loved about her were the layers of inner conflict that made her stand out from the other characters: the struggle inherent in her gender identity; the struggle between her need for independence and her caring attitude toward the younger and needier Lost Boys; the struggle between her attraction toward Wyatt and the perception of his personality’s wrongness. But what really stood out was her inability to let go of her parents – the drunken father and the listless mother – whose house she visits regularly even though they are not aware of her presence, moving inside the implanted hallucinations of the alien clamp: the nightly visits to her former home speak highly of her continuing bond with the two most important people in her life, despite their rejection of her sexual inclination and in spite of Wyatt’s credo about clamped adults being “better off dead”, and make for one of the most deeply emotional scenes in the book.

The slowly accumulating revelations about the aliens’ intention, the children’s plight in this crazy world, their battle against the invader, all contribute to make Annex a compelling read – and I need to also mention the character of Gloom, a different kind of alien that Bo and Violet encounter at some point, a shape-shifting, self-defined saboteur whose true intentions still remain a mystery. As the first book in a trilogy, Annex introduces a fascinating background that begs for further expansion and promises a conflict whose ramifications and outcome are far from certain: I look forward to learning more about Violet & Co. and can hardly wait for the next book in the series.