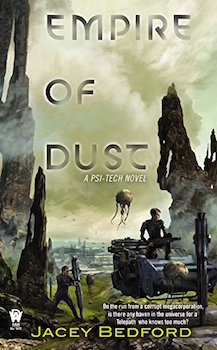 There are several interesting themes, at the basis of this debut novel, that I found intriguing, telepathy being the foremost of them, and I enjoyed how it was woven into the background of a galaxy-spanning civilization ruled by corporations and therefore plagued by the usual afflictions of economic interests and greed.  The end result might not have been completely successful at times, but it was a fast and entertaining read, and one that holds the promise of developing into something much more substantial.

The main character, Cara Carlinni, is a telepath on the run: formerly employed by one of the two big galactic corporations, Alphacorp, she is now hiding from her boss and former lover Ari Van Bleiden because of the vital information she possesses and that could damage him if it came out into the open.  Empire of Dust‘s take on telepathy is an intriguing one: people with such potential (which does not limit itself to mind reading) are enrolled by the big corporations and provided with an implant that enhances such abilities, allowing them to communicate across vast distances, for example, or to merge with a ship’s instruments to better guide it through space.  The implants also work as a sort of locator beacon, and for this reason Cara is not activating it (although that causes her a great deal of stress) and taking menial jobs to survive.

Having been discovered once again by Van Bleiden’s minions, Cara connects with another telepath, Ben Benjamin, working for Alphacorp’s rivals, the Trust, and manages to escape on his ship. Despite the initial difficulties in their encounter, Ben decides to help her escape and recruits her, under a false identity, for the latest mission he’s been assigned to together with a team of specialized telepaths, that of assisting a group of anti-technology colonists settle on the new world of their choice and start a back-to-the-origins kind of life.  Of course Van Bleiden’s hounds have not given up their search, and other kinds of corporate mischief threaten the safety of both Cara and Ben, not to mention that the difficult co-existence between the telepaths and the Luddite colonists adds another level of danger to the mission.  And of course between the two main characters some feelings are developing…

As I said, while Empire of Dust proved to be an entertaining read, and one that showed some promise for the future, I could not avoid feeling that in some instances it felt a little old fashioned, reminding me of the kind of stories written in the ’60s or thereabouts, stories that at times glossed over in-depth examination in favor of advancing the plot: there is nothing wrong about this kind of choice, of course, but when I’m given glimpses of an advanced civilization and the way it works, I like to know more, to see how certain details came to be to better understand how they apply to the story.  This novel gave me the impression that there was much more underlying the events being described, but that the author had shied away from delving deeper into them, so that my curiosity ended up bordering into mild frustration.

On the other side of the spectrum, though, the theme of the Ecolibrians, the colonists searching for a virgin world to be colonized in the old way, without assistance from machines and other technological implements, is an intriguing one: the “return to nature” movement is not a novel idea, but here it proves interesting because of its desire for a simpler way of life, despite all the drawbacks that such a choice entails, especially in a new, potentially hostile world whose dangers have not been completely assessed.  In any technologically advanced society there are always people who feel the need to distance themselves from the perceived slavery to everyday’s gadgets, and in this novel the colonists make us think of the mid-nineteenth century adventurers who moved west on oxen-driven wagons, bent on facing the unknown in search of a better way of life.  Of course there are always extreme elements driven by the need to step even further, and those depicted in Empire of Dust provide for some of the more dramatic, tension-filled moments, showing us how human nature basically remains the same, no matter the location or the time frame.

The same duality in plot I mentioned above extends to characterization as well: the “good guys” are portrayed well and give birth to rounded, believable figures it’s easy to picture in one’s mind.  I quite enjoyed the slow-building relationship between Cara and Ben, the way their interaction started off with unspoken truths and withheld secrets, to move gradually toward trust and then love – and I’m glad to report that the love story is not central to the novel, but only one of its elements. As a matter of fact, I ended up rooting for them and hoping that the misunderstandings and problems that afflicted their relationship would be resolved: these two start out as co-conspirators, move on to comrades and partners in danger and then progress toward something deeper – no insta-love here, thankfully.

Unfortunately, I can’t say as much about the antagonists, since they on the whole look more like the cookie-cutter variety of baddies, and if any of them sported some mustache I’m sure they would have twirled them evilly. Here lies my main contention with Empire of Dust, because the “bad guys” are all irredeemably bad, and just for the sake of it – especially Ari Van Bleiden and his theatrically cruel sidekicks.  I would have enjoyed a little more depth in them, and not characters merely driven by malice for the sake of it.

On the whole, however, this was a very enjoyable novel, and I have no difficulty in ascribing any flaw I detected to its nature as a debut work: the promise for better pacing and characterization is there and I will certainly keep on reading this series in the hope to see those promises flourish.