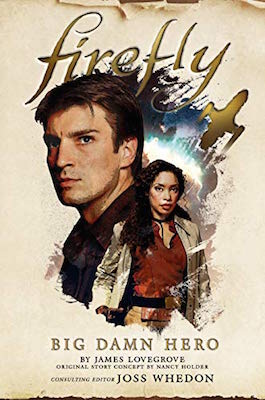 Every time I think about the ill-fated TV show Firefly, or hear it mentioned, I can’t avoid a combined feeling of sadness and irritation, the former for the untimely demise of a very promising story, and the latter for the short-sightedness of the network executives responsible for that decision – a situation all too common in the unfathomable world of television, and whose lack of wisdom is stressed by the huge success that the short run of 14 episodes and the 2005 feature movie Serenity are still enjoying today, a long time after the cancellation.

For this reason, any opportunity to enjoy new stories focused on the crew of the ship Serenity is still welcome, so that when I learned of the publication of this book (thank you Tammy!!!) I made it a point to check it out as soon as I could, despite a few misgivings: over the years I had tried some fan-written stories, but I was never lucky enough to find any that truly could bring the old ‘magic’ back, so I approached Big Damn Hero with some trepidation.  Well, as it turned out I should not have worried, because this novel is the closest I ever came to the true spirit of the TV show and its characters.

The story starts more or less where the last episode of Firefly left off, which is a double bonus, since it works as a continuation of the show and allows me to avoid dealing with the painful losses suffered by the crew in the movie Serenity: the old gang’s all here, and they are a sight for sore eyes… Of course they are in trouble, but that’s nothing new: with finances at an all-time low, and with the ship needing constant repairs, Captain Reynolds must accept a cargo from the disreputable Badger, the crafty boss of Persephone’s criminal underworld.  This time the shipment carries an added problem, since it consists of several crates of highly volatile explosives, destined to a mining operation, which must be delivered in a short time frame, or they might blow up in transit.  In an attempt to kill two birds with a stone, Mal also takes on another commission, an apparently easy task whose destination lies on the same course as the main job – and since in this part of the ‘verse “easy” often equates with “tricky”, the meeting with the mysterious client ends up with Reynolds being attacked, kidnapped, and taken off-planet for destination unknown.

What follows is a fast story running on parallel tracks: the crew must deal with the dangerous shipment and take it to destination before it – and Serenity – are blown to smithereens, while trying to find out what happened to their Captain, the only certainty being that he’s in danger and that time is of the essence. Meanwhile, the Alliance is on their tracks, again, searching for their two most-wanted passengers, Simon and his disturbed sister River, and tempers aboard ship are becoming as volatile as the explosives in the cargo bay. As these threads develop, we discover some interesting details about Malcom Reynolds’ past and that of Shepherd Book, one of the most mysterious members of Serenity’s crew, while we renew our acquaintance with each one of the characters we learned to appreciate and love in the past, as every one of them enjoys some screen time.

Zöe gets indeed the lion’s share of the focus here, and it’s a narrative choice I greatly appreciated since she’s always been my favorite character: if on the show she distinguished herself for her no-nonsense attitude and short, caustic utterances, here we are able to get into her mind and see what makes her tick. Her unfailing loyalty to Mal plays as a nice counterpoint to Jayne’s selfishness and matter-of-fact acceptance of the possible loss of their captain, and it’s in the interactions between the two of them that I found the true spirit of Firefly in this book.  The brisk pace of the novel does not permit the same level of depth for the other members of the crew, although there are a few moments in which River’s uncanny powers play a significant role and we can perceive the hidden layers of her formidable but deranged mind, and in those moments I could very easily hear her voice and its peculiar cadence.  The true discovery in Big Damn Hero is reserved for Shepherd Book however, and the hints (too few, granted, but better than the continuing mystery) about his more… energetic past: it’s interesting to see him in a more active role and I liked how he was able to balance the compassion required by his calling with the ability to meet physical threats.

The “meat” of the story, though, comes from Reynolds’ abduction and the reasons at the root of it: these reach far into his past and focus on his youth and the later war experiences, giving the readers a chance to witness some of the events that molded him into the present individual. This thread also takes a closer look at what it means to be a former Browncoat in a world now firmly ruled by the victorious Alliance, and how the bitterness of that defeat can still prey on the minds of those who lost the fight – sometimes with toxic effects.  Another interesting side of this narrative theme comes from the fact that the crew is forced to scatter in different directions, as some of them try to fulfill their job and others need to stay and investigate Mal’s disappearance: the main strength of Serenity’s complement comes from their being an actual family, and the lack of one member – especially the pivotal Captain Reynolds who is their glue – deeply unsettles them, besides being a source of deep worry for his safety.  I was reminded in several instances of one of my favorite episodes, Out of Gas, where a life support malfunction forced them to abandon ship leaving Mal alone aboard as he tried to restore the systems: as it happened in that episode, the crew’s separation mines their confidence and for a while makes them unable to effectively react to the situation at hand.  But once they do, their synergy is a joy to behold…

Big Damn Hero might not be a perfect novel, since it sports some quirks and weaknesses, but they are negligible when compared with the sheer joy of being immersed once again in this ‘verse and meeting again these beloved characters.  A joy I expect to renew with the next book in this welcome revival series.