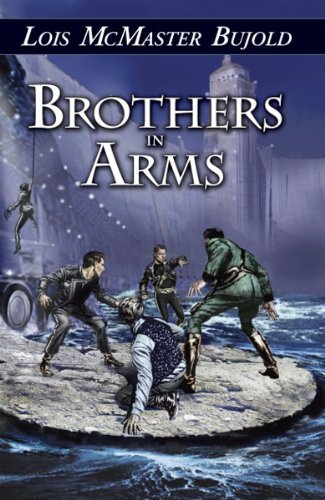 In the trend that has characterized the last few books in the series, this novel is again set on a different planet and this time it’s none other than Old Mother Earth: after the successful rescue mission on Dagoola IV, Miles and the Dendarii have suffered heavy casualties and serious damage from the enraged Cetagandans, who are hell-bent on taking revenge on Admiral Naismith for the recent defeat.  Seeking a safe harbor and a well-stocked repair dock, Miles lands on Earth – now far enough away from the more travelled space-lanes as to offer a relatively more secure hideout. And what’s even more important, the Barrayaran embassy in London should be able to release the much-needed funds required for ship repairs and medical expenses.

There is a double surprise waiting for Miles at the embassy, however: Captain Duv Galeni, the local head of Security, is a Komarran national – one of the new generation of officers that should serve as a bridge between the troubled past and the future for both Komarr and Barrayar – and he is suspicious of Miles’ double role and the real nature of the mercenary army at his command; and Ivan Vorpatril, Miles’ handsome womanizing cousin has been stationed on Earth under Galeni’s command.  A series of misunderstandings, coupled with a strange and worrisome silence from Barrayar on the matter of the money needed for repairs and the troops’ back pay, sees Miles running every which way even more frantically than usual (and we all know what usual entails for our beloved hero…), while he has to juggle his two personas – Lord Miles Vorkosigan and Admiral Naismith – without the customary distance he’s able to enjoy, to the point that the resemblance between them is noticed and commented on, causing him a great deal of panic where his cover identity is concerned.

Intrigue and complications seem to follow Miles like a shadow, and there is a great deal of both here: his ambiguous status as Lieutenant Vorkosigan, low in rank but supported by family affiliation, always made navigating the chain of command a subtle balancing act, while now the presence of Galeni as a superior officer adds a factor of uncertainty because of the edgy relationship between Barrayar and conquered Komarr and Miles’ doubts about Galeni’s trustworthiness – doubts that the delayed funds do little to dissipate.  And things get even more complicated once one of Miles’ bright ideas to explain the physical resemblance between himself and Admiral Naismith turns against him in one of the most surprising twists of the story….

As is to be expected from any novel featuring Miles Vorkosigan, Brothers in Arms quickly turns into a breakneck adventure where devious plots, daring escapades and political expediency blend seamlessly into a sequence of events that might look unbelievable even for this genre if it were not for Bujold’s admirable control of pacing and timing and her unfailing balance between comedy and more serious issues.  The latter are taking up more space of late and adding more facets and depth to the characters, especially that of Miles: as Admiral Naismith, he acknowledges the weight of responsibility for the people working under his command, and he wants the best for them – be it timely pay or the medical attention some of them badly need. He has come a long way from the swashbuckling youth who landed by accident into a mercenary outfit and took command of it with bare-faced boldness and deceit, and he feels the burden of every life lost, of every grievous wound incurred, especially after what happened on Dagoola, where he witnessed the bloody consequences of war without the safe distance allowed by giving orders from a ship’s bridge.

As Miles Vorkosigan, he still feels the need to prove himself but it’s less pressing than before: he has demonstrated his value, either as himself or as Naismith, and knows that the people who matter are aware of his accomplishments – just as they are aware he’s a loose cannon, but that’s another matter entirely… Yet he still wants – needs – desperately to belong in Barrayaran society, to offer his contribution as a Vor, and to that end he asks Elli Quinn, his executive officer, to marry him: Elli is a wonderful character, strong, capable, determined, and above all able to appreciate Miles for his keen mind and generous soul rather than for his not-so-athletic body, and while she finally represents the love interest he so far lacked, she is certainly not Vor-lady material.  I was not surprised Miles proposed: Elli shares many traits with his mother Cordelia and it’s easy to see how he might have thought that if a Betan Survey captain could mold herself into the role of a Vor countess, Elli could follow on the same path – but Quinn has other goals and priorities and above all the clarity of mind to understand that she could never adapt to Barrayaran society.

“And so you want to maroon me for the rest of my life on a, sorry, backwater dirtball that’s just barely climbed out of feudalism, that treats women like chattel—or cattle—that would deny me the use of every military skill I’ve learned in the past twelve years from shuttle docking to interrogation chemistry . . . I’m sorry. I’m not an anthropologist, I’m not a saint, and I’m not crazy.”

For the second time in his life Miles has fallen for a woman who rejects everything Barrayar stands for, and as it happened with Elena Bothari it is Barrayar that rises as a barrier between them.  Cordelia was right in saying that it’s a planet that eats its children, in that it requires many sacrifices of them, and here this harsh truth becomes even more plain when Miles reveals the reason his parents choose not to have other children, because cruel Barrayar would have forced them to reject Miles as the imperfect one, unworthy of one day becoming Count Vorkosigan, in favor of an able-bodied, untainted sibling.   This parental choice certainly increased Miles’ chances for his future role, but also enhanced his essential loneliness, a trait that often surfaces in his most maudlin moments and is expressed in the sentence “I wanted a brother” he utters at some point – which presents some intriguing possibilities given the huge surprise at the core of this book, one that will certainly have fascinating repercussions in the future.

Miles’ adventures would not be the same without the presence of his long-suffering cousin Ivan, and it’s only right to focus on him for a while, because like other characters he reaches better definition here in Brothers in Arms, not only as Miles’ unwilling partner in crime, but as someone who only plays at being foolish, to shift attention away from himself – and in Barrayaran society that might very well be a survival trait.  There are several instances in which Ivan replies with pointed quips which reveal his sharp intelligence under the fatuous façade, but the more interesting moments are those in which he recalls the outlandish childhood escapades in which Miles was the mastermind, while Ivan and Elena unfailingly ended up in trouble – if anyone wondered how Miles came by his present outrageous schemes, they need look no farther than that shared childhood….

With this novel, Bujold takes us into the more complicated, more profound part of her saga, where serious issues take precedence over happy-go-lucky adventures, and while the entertainment factor of the story remains the same, the complexities of plot and characterization become more fascinating, and I truly look forward to revisiting the next books.