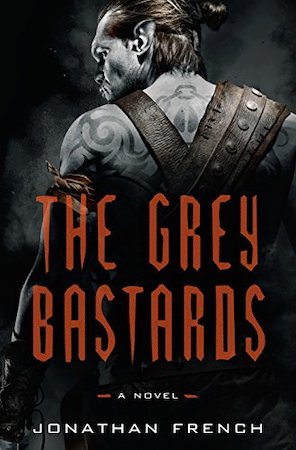 This book sat for some time on my TBR before I finally picked it up, despite my curiosity to sample it given the many enthusiastic reviews from my fellow bloggers and the promise of a different kind of fantasy story, one where the proverbial bad guys – in this case half-orcs – were the heroes and not the villains.

The novel approach was indeed a welcome change from the usual narrative tracks, but unfortunately the delivery did not work for me: to be honest I kept trying to remember that with a debut work I should have given this book a wider latitude and exercised more patience, but when I reached the point of “too much is indeed too much” I saw no other option than to give up reading and move toward greener pastures.

The Lot Lands are a harsh, dangerous place where – after long conflicts and a devastating plague – a multitude of creatures has come to live: reclusive Elves, rampaging Centaurs, a smattering of Humans and the half-orcs, the product of a forced mating between humans and full-blooded orcs. The latter now and then still trespass into the area in search of plunder, and that’s where the half-orc bands – or hoofs – come into play as a defensive force, mounted on specially bred wild pigs called barbarians whose loyalty and intelligence are highly valued.

Jackal, Oats and Fetching (the only female of the Grey Bastards hoof – and probably the only female ever admitted into a band) are very close comrades, and at the very beginning of the book they clash with a troop of human soldiers killing one of them and setting in motion an unpredictable chain of events whose consequences might be ranging even farther than they can imagine, or that I could imagine, since I chose to desist at roughly one-third of the way.

As I said, the premise is an interesting one, even though the story went all over the place with no indication of a precise concatenation of events: it’s quite possible that the disparate situations DID come to a confluence at some point, but since I lacked the willpower to reach it I guess I will never know…. What turned me away from The Grey Bastards was a growing annoyance with two of its major components, one being the foul language used with irrepressible glee: granted, in the kind of background and company described in the book, profanity would be a major ingredient, but the frequency with which it was used went well beyond any reasonable narrative need and quickly turned into the kind of fixation for repeating a newly-learned four-letter word we see children indulge in, using and abusing it for its shock value. I am far from prudish and understand that harsh language and a harsh world go hand in hand, but the effectiveness of vulgarity is inversely proportional to its frequency, so that the profusion of f-bombs, crude sexual references and their many combinations quickly went from colorful to bothersome, and a distraction from the story itself. More than once I was reminded of something a wise friend told me once about the excessive use of coarse expletives in any conversation: that it’s a filler for the lack of appropriate language to express one’s thoughts, and ultimately the indication of a lack of thoughts as well. Not exactly the best endorsement for any story…

My other point of contention comes from the portrayal of women: again, I know that the chosen background is far from conducive to female agency, but why are the women in this story relegated to the roles of either caregiver (just one, as far as I went) or whore? No, that’s not right: there are also one woman warrior, with a chip on her shoulder that’s even bigger than the hog she rides on, and an elf who was the prisoner of a foul creature and the victim of orkish rape, which resulted in a pregnancy. Not the best kind of representation, from my point of view. The proverbial “oldest job” appears to be the only one ever considered for women, because in this world there seems to be no place for, I don’t know, a village baker or vegetable grower: if one does not find employment in the orphanage where youngsters are raised, all she has to look forward to is the brothel, or the bunk of a warrior as his personal bedwarmer. That’s all, and it’s a dismal summation, indeed – hopefully just an over-the-top description of this world and not the author’s view on life…

Before posting this review I re-read the ones from my fellow bloggers that compelled me to try The Grey Bastards, and came to the conclusion that this might be a classic case of “it’s not you, it’s me”. Not my kind of book, sorry.

35 thoughts on “THE GREY BASTARDS, by Jonathan French (DNF)”