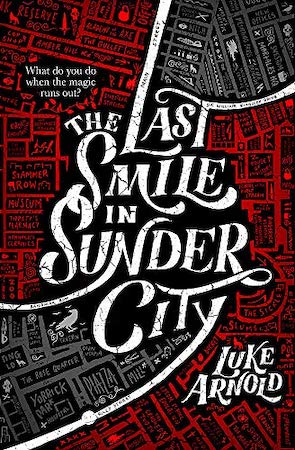 I received this novel from Orbit Books, through NetGalley, in exchange for an honest review: my thanks to both of them for this opportunity.

Urban Fantasy scenarios often share several common elements: a city where supernatural creatures exist side-by-side with humans, either in plain sight or hidden; the presence of magic; an atmosphere typical of noir movies; and a P.I. engaged in a complex investigation. The Last Smile in Sunder City does possess these elements, granted, but sets them in an unusual background that gives the story and its characters a new, intriguing perspective.

The world in which the story is set was imbued with magic once, but a catastrophic event named The Coda closed off its source with tragic consequences, and now the city of Sunder, once a flourishing center of industry, is just a ghost of its former self, as are its supernatural inhabitants, stripped like their world of any magical attribute that made them what they were. Fetch Phillips is a human Man For Hire, eking out a meagre living by accepting odd jobs, just enough to pay the rent and fuel his drinking habit – he does not work for his fellow humans though, out of a deep-seated sense of anger and guilt whose roots are explored in the course of the story.

Tasked with looking into the disappearance of a teacher from the city’s multi-species academy, Fetch finds himself caught in the kind of complex tangle of misdirections and threats that is to be expected in a story’s investigative thread, but this inciting incident is only the pretext to explore the world and its inhabitants as they try to pick up the pieces of the past and to build a new life out of the ashes of the old one. Fantasy novels more often than not rely on magic, but here instead we explore a culture that has to deal with the sudden death of it, and what this means in the everyday existence of Sunder’s citizens: the sad, grey, hopeless mood of the story often reminded me of Tolkien’s Elves’ long defeat, a battle with no hope of victory that is however still fought because the idea of surrendering to the inevitable is even more loathsome.

The world building in The Last Smile in Sunder City is its best feature, indeed. The image of Sunder City that I built in my mind reminds me of a town in the throes of the Big Depression, where people have to find new ways to survive not so much out of financial troubles (although they are a factor in many instances), but out of the disappearance of the magic that helped run many of the activities, like the streets deprived of wizardry-powered electricity and barely lighted by torches or fires. Then there are the dreadful physical transformations brought on by the Coda: werewolves frozen in the transition from wolf to man, formerly immortal Elves who aged overnight or even crumbled to dust, vampires who lost their teeth and the ability to thrive on blood – the description of what happens to the majority of those supernatural beings at the very moment in which the Coda happens is something both nightmarish and imbued with profound emotional impact.

The social changes in the post-Coda world have taken another, uglier facet as well: the connection to the world’s magic was severed by humans in an underhanded attempt at harnessing that power – humans were the only ones unable to tap it, and it was their intention to put themselves on the same level as the magically-able creatures. Now that supernatural beings have been stripped of their edge, humans feel entitled to take over: their technology, the mechanical means by which their civilization moves, are the only ones that work now, which puts them in the position of superiority they craved for a long time. Not a pretty spectacle at all…

In all of this, Fetch Phillips keeps his distance from everything and everyone, a loner by personal history and by choice, nursing his deep guilt with the same care he nurses the endless bottles of liquor and the drugs that barely help him go through the days: at face value this personality traits, and attitude, would have made me dislike him immediately, but for some reason I felt pity for him, which increased as his story was revealed through the flashbacks showing how he came to be the individual he is now. Fetch Phillips seems destined from a very young age to be alone, even in the company of others, of being the one looking in from the outside, never being part of something, never feeling accepted, and this shapes both his psychological profile – past and present – and the string of bad choices that ultimately bring him to the momentous decision whose outcome will weigh him with endless guilt and regret. He is a man possessed by a strong death wish, uncaring of the damage he sustains as a result of his actions, but at the same time he does not seem to really want that end, because it would also mean the end of his self-inflicted penance – and also the end of what little good he might do to atone for his past mistakes.

I’m aware that all of the above might sound depressing and excessively gloomy, but in reality it’s not as grim as it might seem and it’s also quite compelling, not to mention that the small, very small glimmer of light that can be perceived toward the end promises that things might not look so hopeless in the next book, or books, of this series.

As a debut novel The Last Smile in Sunder City is not a perfect one: there are some pacing issues, particularly in Fetch’s flashbacks that could have been tightened a little to avoid the loss of focus on the issues of the present, and there are times when the search for the missing vampire teacher seems to become irrelevant, instead of being the connecting element of the story. Yet, the narrative remains engaging throughout, and that’s definitely a plus: I will look forward to seeing how Sunder City – and Fetch – will fare in the next installments.

22 thoughts on “THE LAST SMILE IN SUNDER CITY, by Luke Arnold”