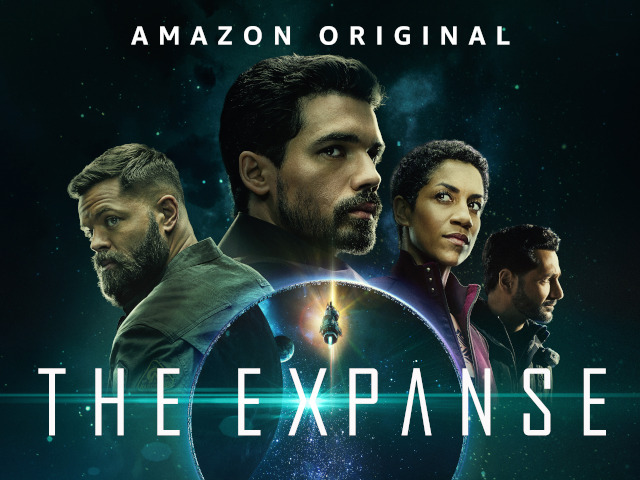 Watching this new season of The Expanse felt like a double gift this time, first because it’s always a pleasure to watch this awesome space opera saga translated to the screen, and second because the narrowly averted danger of having it canceled after Season 3 made me realize how well it complements the books that inspired it, and how much I enjoy seeing these characters and backgrounds brought to life before my eyes.

Season 4 follows the events of the fourth book in James S.A. Corey’s series, Cibola Burn, and marks a number of changes in the narrative scope, broadened by the discovery – at the end of Season 3 – of the massive ring-gates system leading to a great number of new worlds in which humanity can expand. Here we set eyes on an extra-solar planet, and for one of the Rocinante’s crew this also represents the chance of setting actual feet on a world, after having lived only on ships and space stations. There is little time to enjoy the view, however, since Ilus – the planet in question – has been settled by a group of Belters who found it rich in minerals they can trade: an Earth corporation, however, wants to seize Ilus’ mining rights, so the conflict with the Belters becomes inevitable despite the mediation mission the Roci’s crew has been tasked with by U.N. Secretary Avasarala.

As the drama on Ilus unfolds, helped along by the reappearance of Miller’s ghost, the rest of humanity is dealing with other troubles: Martians are not so keen on terraforming anymore, since the discovery of inhabitable worlds has made all previous efforts meaningless, and there’s a despondent mood running through the population that translates in the rise of petty (or not so petty) crime and in the loss of the singular focus that used to drive them. Belters, on the other hand, have gained a seat at the “big table” but are still trying to find the balance between the previous individualistic attitude and the need to conform to different standards, which is creating a rift between various factions.

These are the main plot points from which the season’s story takes flight, but as usual I prefer to concentrate on the characters and the various questions raised by the situations they find themselves in. The main focus is on the matter of property and rights involved in the colonization process: does it work on a “first come, first served” basis, or does the strongest, better equipped (and armed) team get to exploit a new planet’s resources? Once again we see Belters trying to claim a place as their own, only to see Earth-based corporations swoop in and challenge their rights: where it’s easy to sympathize with the Belters’ plight, particularly because the Earth enforcers and their leader Murtry are not pillars of morality and fair play, it’s also true that the extreme measures employed by the colonists to assert their rights place them in the wrong.

This is one of the reasons The Expanse is markedly different from other portrayals of humanity’s future, because it takes into account our frailties, our darkness, the inability to shut down the baser instincts that have accompanied us from the dawn of time – and if it’s a disheartening look at ourselves (when we realize that even leaving the confines of Mother Earth we will be unable to leave behind the evil side of our soul) it’s also a very lucid contemplation of what we are and it reserves room for hope as well, as it should. There is a scene between Naomi and Lucia, one of the Belter colonists, in which the latter is crushed by guilt for her previous actions, and Naomi relays her own story of past mistakes and redemption: it shows that for all our flaws we can decide to change for the better and to move past our faults.

None of the characters we have come to know so far remains untouched by the paradigm shift (to borrow the title of a previous episode…) created by the ring gates and the potential for exploration and exploitation inherent in the discovery of so many habitable worlds: UN Secretary Avasarala finds her position threatened by a young opponent set on winning the chair at the next elections, and the crafty politician must walk a fine line between the needs of Earth and those of her career; former Martian marine Bobbie Draper went back to a home she does not recognize anymore, her uneasiness compounded by the difficult adjustments she must undergo in her life as a civilian: it was very painful to see Bobbie so uncertain, so out of her depth and forced to accept compromises that she would never have dreamed of before. Camina Drummer faces some hard choices as well, with the need to balance her Belter roots with the realpolitik requirements of the new – if still uneasy – alliance with the “Inners”: her exchanges with Ashford (a character I felt myself liking more and more as the story progressed) are among the best pieces of dialogue offered by this season.

But of course, it’s the Roci’s crew that goes through the wringer, and in more ways than one. Naomi wants to follow her crew-mates on Ilus and so she undergoes a punishing regime of medication and exercise to adapt her low-gravity physiology to ground-level conditions: the scene in which she sets foot on the planet is one imbued with both great emotion and a sense of wonder – the moment in which, exiting the air-lock, she stumbles, either in consequence of the gravity differential or a touch of agoraphobia, is dialogue-free but conveys a number of conflicting feelings very well.

Holden, typically, tries to do the right thing and ends up making the situation worse – this time, in truth, he’s not completely to blame, but still… Unlike past instances, however, he does not take the moral high ground and realizes his fallibility, which in turn makes him much more human and relatable: a definite improvement on the previous seasons, indeed, helped along by Ilus, the kind of planet that does its best to show people how small and frail they are, and how easy it is to snuff them out. It’s a lesson that Amos learns the hard way too, when he’s put in a situation of extreme vulnerability, one where his killer instincts are useless and his proverbial nonchalance is severely tested. Which does not mean that we are not treated to a few delightful “Amos moments”, like the one in which the despicable Murtry predicts they will eventually come to blows and Amos replies “I’m free now”.

Season 4 of The Expanse starts somewhat slowly, as if unsure of its footing: I wondered if the change of “home” for the show was a mirror for this uncertainty and it needed to find its new balance. But once the pieces are set on the board, the story takes flight and turns once again in the gripping narrative we have come to expect, ending on a massive cliffhanger that introduces the dramatic events of Nemesis Games: if you know what I’m talking about, those last images are an ominous reminder, if you don’t…. well, expect something truly impressive.