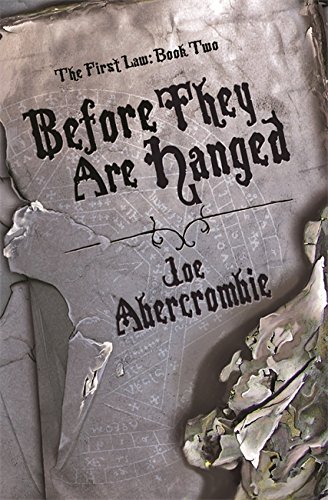 More than once I have admitted my lack of patience when confronted with long set-ups, a flaw that probably made me miss on a few good books because I could not wait for the story to finally take flight, but with the first book of this trilogy I was not only able to curb my usual impatience, I was eager to learn where the author was taking me (and quite enjoying the ride), so now I’m happy to say I was very richly rewarded with this second installment in Joe Abercrombie’s debut work. Here the seeds planted in The Blade Itself come to fruition and grow into a multi-faceted tale that promises to flow into an equally enthralling final book.

The characters we got to know in the previous novel are now traveling all over the world: Bayaz, the first of the Magi, has taken his company – Logen Ninefingers, Jezal dan Luthar, Ferro and a few others – toward the west, and the mysterious quest for which he needs their peculiar abilities, as the group ends up facing harrowing dangers and hardships to fulfill a mission whose details only their leader knows; Colonel West marches North with the Union army to fight agains the invading northern barbarians led by Bethod, and is saddled with the handling of crown prince Ladisla, a complete idiot in love with the idea of battle and glory, and totally unsuited to the task at hand; and Sand dan Glokta, inquisitor extraordinaire, is promoted to Superior and tasked with the defense of the southern city of Dagoska, under siege by the Gurkish – the old foe who once captured and tortured him, turning him into the cripple he is now.

While there is decidedly more action in Before They Are Hanged, what with hazardous journeys, bloody battles and a doomed siege whose problems are compounded by treachery and personal agendas, the characters remain the central focus of the story, growing in depth and facets and at the same time showing their humanity in all its high and low points: in the space of these two books in the series, Joe Abercrombie’s characters have turned from fictional creations into flesh and blood people it’s easy to believe in, care about (or despise, in some instances) and root for.  Maybe the only one for whom the jury’s still out is Jezal dan Luthar, the dandy swordsman with a superiority complex, the one who keeps sneering at this traveling companions: grievously wounded in a skirmish, he realizes the importance of team work, of respecting one’s companions, of reaching out to them as people and not as objects of contempt. The change that comes over Jezal with this epiphany seems too quick, too radical to feel truly plausible, but I have faith in the author and look forward to seeing where this individual’s path will lead.

Logen Ninefingers took little time to become one of my favorite characters in Book 1 and here he becomes more definite, more solid: on the surface, Logen might look like an uncouth barbarian, a man with little depth and a brutish disposition, but there is much more to him than meets the eye at first sight. Both in his personal reflections and in the interactions with his traveling companions he shows a talent for introspection and wisdom that belies the surface coarseness he presents to the world, as is the case of this campfire observation:

He and Bayaz were close enough to the fire, but the others were further than comfort would have put them. Drawn close by the wind, and the cold, and the damp night, pushed further out by each other.

The advice he offers Jezal, and his steadfast friendship overtures toward Ferro – the former Gurkish slave turned into a formidable, perpetually scowling warrior – point toward a different side of Logen’s character, one I’m not sure I can label as gentler, but certainly far more human and sympathetic than what the rest of the group shows to each other.  If at some point the unlikely company shapes into something more than a band of strangers, and becomes a team ready to watch each other’s backs, much comes from Logen’s relentless attempts at bonding, which can either move into humorous territory, as in the scene where the group discusses battle scars, or turn to starkly profound musings:

A family? I did have one. And now I’ve got another. You don’t pick your family, you take what you’re given and you make the best of it.

Colonel West undergoes some big changes as well: the man so easily annoyed, and weighted with a huge chip on the shoulder due to his lowborn origins, is forced to curb his annoyance and anger when having to deal with prince Ladisla and his cronies, their complete inadequacy in managing an army and their bloodily ineffective handling of Bethod’s onslaught. The man who built his career on adherence to rules, to a strict moral code of conduct, finds himself in a grim situation where he will need to delve into the brutal side of his personality to survive. West’s transition toward a more savage frame of mind is an interesting – if at times terrifying – journey and one clearly inspired by the Northmen allies he finds along the way, who are Logen’s long-lost friends and also very interesting characters I hope to see more of in the next book.

As was the case with The Blade Itself, I kept the best for last – Sand dan Glokta: much as I enjoy reading about Logen Ninefingers, Glokta remains my favorite character, because he’s the best defined and the most intriguing creation that Joe Abercrombie brought to life. The core of my attraction for Glokta comes from his dual nature: a savagely crippled individual who seeks and finds beauty where he can; a professional torturer who knows intimately the meaning of pain, and yet does not enjoy inflicting it; a man who professes outward cynicism while adhering to a unique moral compass. It’s Glokta’s complexity that makes him such a fascinating individual, that and the dichotomy between his inner musings and his outward utterances. He might say:

As for being a good man, that ship sailed long ago, and I wasn’t even there to wave it off.

yet he risks a great deal to show mercy to a powerful adversary; or again he can freely admit:

You could not even guess at the things that I have done. Awful, evil, obscene, the telling of them alone could make you puke. […] I push it all into the dark corners of my mind, and it’s incredible the room back there. Amazing what one can live with.

yet when he becomes aware of a young woman in distress he applies his considerable influence to rectify her situation, and enjoys the feeling of having accomplished a good deed. Glokta’s principles might be colored in shades of grey, and that’s indeed the main reason for his appeal, one he shares with most of the other characters in this series – all of them of the “dirty, ugly and mean” kind, but still made interesting by the author’s narrative skills.

It took me a long time before finally reading this amazing series, but now that I have I can place it at the very top of my favorite reads. And there’s still more to explore…

16 thoughts on “BEFORE THEY ARE HANGED (The First Law #2), by Joe Abercrombie”