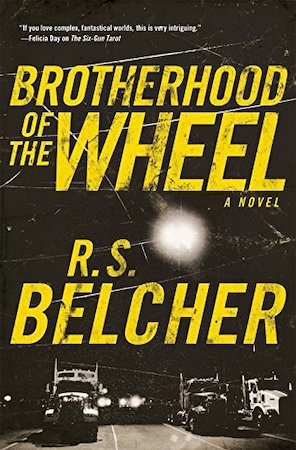 I’ve had this book in my reading queue for quite a while, and despite my curiosity to sample another work from R.S. Belcher, whose Six-Gun Tarot made a good impression on me, I kept postponing it in favor of other titles, but once I started it I made up for my endless procrastination by reading it in the short space of two days, which for me and my limited free time is something of a record.

The premise for this delightfully horrific story is that the legendary Knights Templar did not disappear with time, but remodeled themselves as guardians of the roads and highways of the world, protecting travelers from the ordinary and supernatural predators roaming in search of easy prey. The operative arm of the Brotherhood is drawn from the people who make their living on such roads – truck drivers, patrolmen, road workers – and there is also a number of affiliates or sympathizers in law enforcement who make the task of these modern knights easier.

The first Brother we meet is Jimmie Aussapile, a trucker – the kind of person one might not so easily associate with a hero: middle-aged, paunchy, balding on top but growing long, greying hair down his nape, and with a very nasty habit of chewing tobacco, which stains his teeth. And let’s not go into his dressing style… But looks can be deceptive, and Jimmie is soon revealed for a big-hearted, staunch defender of the weak as he hunts a predator with a huge number of victims on his record: to capture the monster, Aussapile ends up being late for the delivery of his cargo, thus endangering his already shaky financial situation – and with a wife and daughter depending on him, plus a new baby on the way, this is the kind of problem he hardly needs.  Still, when he picks up a ghostly hitchhiker who sets him on the trail of a long list of disappeared teenagers, Jimmie is unable to look the other way, and he will soon find himself enmeshed in a dangerous quest that might cost him much more than financial stability.

Jimmie soon joins forces with Lovina, a New Orleans police officer investigating a case of missing kids that soon reveals its connections with Aussapile’s new expedition, and with Heck, member of a biker gang loosely associated with the Brotherhood and tasked with becoming Jimmie’s squire to fight the good fight. The three of them will come face to face with an ancient evil that has been long preying on the land and established its center of power in the isolated town of Four Houses, a place people can’t leave and that doesn’t seem to exist on the maps or in the common knowledge.

The Brotherhood of the Wheel is the kind of book that makes it hard to put it down, and I begrudged every instance in which I had to do so: it’s not only fast-paced and compelling, it makes you root for the good guys to succeed, and to hate the villains with a passion – which means that the characters are indeed drawn in a compelling way. Jimmie is nothing short of adorable – that is, apart from the tobacco-chewing 😀 – because it’s clear from the start that he puts his heart and soul in what he does, and even if he’s conflicted about the possible repercussions this duty could have on his family, he knows he’s trying to make the world a better place for them and for all the families on Earth. Speaking of which, the sections devoted to Jimmie as a family man are wonderful interludes in the breathless, horror-infused narrative, and it’s thanks to them that this unlikely hero is revealed in all his humanity – as a loving husband and father, as a man who wants to strike fearful respect in the heart of the young boy dating his daughter, as an honest worker worrying for the financial future of his growing household – and giving a firm background to his dedication to the Brotherhood’s goals.

Heck and Lovina, on the other hand, are somehow both scarred by life: the former is a war vet dealing with PTSD by drinking himself into oblivion, the latter saddled by the disappearance and death of her younger sister, which gives her an added incentive in the quest that will bring the three of them together.  While I liked Lovina immediately, thanks to her intense, fearless focus on getting to the heart of the matter, despite logistical difficulties and a ghastly encounter with some evil minions, it took me some time to appreciate Heck, because his overall attitude was a good cover for the pain of his past experiences, and his teetering between nihilism and brashness was not endearing at all.  The way these unlikely allies come together, however, and grow into a formidable team, makes for quite interesting reading and shows Mr. Belcher’s skills in handling his characters.

The world-building is just as intriguing as the people inhabiting it, and it’s a fascinating mesh of mundane and uncanny, of modern urban legends and ancient tales with roots in pagan lore: the horror does not come only from the supernatural elements, although they are quite blood-chilling, but from the assumption that evil is just around the corner, that what we perceive as ordinary life might hide appalling dangers. The story starts with the chase for a sexual predator, which is an awful enough reality, and then moves to less conventional threats, passing through revisited and adapted urban myths to create a situation that keeps the readers on the proverbial edge of their seats until the resolution.

In the end, I quite enjoyed The Brotherhood of the Wheel, although I would have liked it much better if the author had not indulged in the detailed physical description of each character as it appeared on the scene, complete with the accurate list of their items of clothing; or the digressions on internet memes or again the appearance of a supposedly dead musical icon – which to me seemed totally unnecessary to the overall plot.  But these felt like mere “hiccups” anyway, and easily forgotten in the long run, to the point that I’m more than ready to sink my teeth into the second book of the series and to renew my acquaintance with Jimmie & Co.