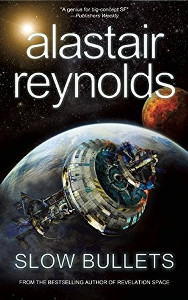 I received this book through NetGalley, in exchange for an honest review.

My thanks to both NetGalley and Tachyon Publications for granting my request, since Alastair Reynolds is one of my favorite SF authors.

Slow Bullets is slightly different from the kind of narrative I grew used to after reading Reynolds’ books like Chasm City, Revelation Space, Redemption Ark or Absolution Gap: the scope here does not concern galactic civilizations or multi-layered political plots, but rather focuses on smaller-scale events that nonetheless manage to gain intensity and depth because of that reduced focus, and not in spite of it.

The main character here is Scur, a soldier who’s been conscripted to fight in a bloody war: when we first see her, a ceasefire has just been declared and yet she’s captured by the enemy and subjected to torture by Orvin, an infamous psychopathic killer from the opposite side.  Left for dead, she wakes up in a hibernation pod on a ship that’s undergone some form of catastrophic malfunction and is now orbiting what looks like a dead system.   The great majority of the slowly waking occupants of the hibernation pods seems to be composed of soldiers from both sides of the war, plus a smattering of civilians, and a skeleton crew: Scur takes on, almost by default, the job of organizing the survivors and finding out their chances of repairing the ship and trying to get back to their intended destination.

The questions about what happened and the need for survival, this last endangered by far-reaching frictions between the waking passengers, are compounded by the awareness that the ship is slowly, but surely, losing precious information because of a program rewriting initiated by the malfunction itself.  And memory is indeed at the core of this story, starting with the titular slow bullets – a recording device implanted in soldiers to keep score of their actions and also to store important memories and personal data.

The fact that Scur’s torture at the hands of Orvin occurs through the twisted use of a slow bullet underlines how memory can be painful as well as a comfort. So, as the marooned passengers slowly understand that their predicament could not be purely ascribed to an accident, as they realize their numbers are mostly composed by people no one wants around – because they are useless, or dangerous, or simply a burden –  they also recognize that only by letting go of their personal memories, of their past, they can start planning for the future.  It’s a terrible, sad realization, placed into stark relief by Scur’s attachment to her parents’ pictures, stored in her slow bullet – her only contact with them, with her past and the person she was before the war and her conscription in the army.   What she and the other survivors must accept the terrible necessity to give up that past to be able to build a future: even though the hope for that future is clearly expressed in the story, the price it requires seems too high, too heartrending.

All this is presented through Scur’s voice and point of view: her almost blunt, soldierly manner cracks at times to show a different person, one far less pragmatic and hardened than the one she shows to the world, and these chinks in her armor endeared her to me, made her real. Underneath the soldier, and survivor of a heated conflict, sometimes lurks a person who pines for her lost life, the missed opportunities, the untrodden paths that fate denied her: it’s never openly stated, never spoken out loud, but it’s there and it’s a form of quiet desperation that denies detachment and does not leave you untouched.

It’s a more intimate vision than what I encountered until now in Reynolds’ books, but for this very reason it felt more profound and poignant than any other I read so far, and it gave me a new level of interpretation for this author, and a key to a new way of reading his stories.

Highly recommended, both for Reynolds’ admirers and as an introduction to this author.