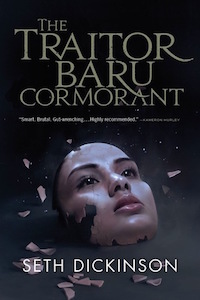 This was possibly one of the most talked-about books of the past few months, so it was bound to cross my attention threshold, although some controversial comments led me to believe it not would be an easy read.

The Traitor Baru Cormorant is indeed a complex novel, both in scope and story structure, but it’s also a fascinating one, and it drew me right inside its well-crafted landscape of a society in the throes of change – not all of it welcome.

The Masquerade is the name of a conquering empire that does not wage war to annex new territories, on the contrary it does so by slowly, but steadily, encroaching on its neighbors’ economy, customs and ultimately on their way of thinking. In my opinion this is far more brutal than mere military occupation, because the Masquerade aims to win by destroying everything that does not conform to its way of thinking, and by destroying whole cultures in the process, smothering any ethnic or philosophical difference with its unstoppable drive of Borg-like will to assimilate everything its finds on its path.

The building of schools, where the young are taught to embrace the Masquerade’s way, and the sudden onrush of previously unknown plagues (the smallpox-infected blankets allegedly given to the American Indians come to mind) are other ways of eradicating the past in favor of the new conquering mindset, and they show the ruthless determination powering this empire in its expansion.  This merciless shaping touches every aspect of life, including personal choices in matters of religion, family structure, sexual orientation: in the latter case, brutal punishment is applied to those who don’t conform to the Masquerade’s strict, myopic rules of “social hygiene”, painting a chilling picture indeed, even more so because several other details, like forced interbreeding and genetic experiments, resonate with our own history in a quite uncomfortable way.

In this background moves the main character, Baru: a child on recently-invaded Taranoke – a place that has the flavor of a carefree Pacific island, where sun, sea, fish and birds shape the landscape – she willingly embraces the Masquerade teachings, first to quench her deep thirst for learning, then, once she gets older, with the aim of one day changing the system from the inside.    Blessed with a keen analytical mind, Baru excels in all math- and finance-related studies, so that she gains the important post of Accountant in the remote realm of Aurdwyn, where she will exercise the Masquerade’s will in a place that has been known as a breeding ground for rebellion.  According to her plans, Aurdwyn will be the final test of Baru’s brilliance: success at this post, the “land that cannot be ruled” as its inhabitant proudly claim, might one day take her on the fast track to the center of government, where she will be able to effect the changes she aims for, in the name of her beloved Taranoke.

If I was afraid that the economic complexities of the story might distract me from it, I was wrong, because at the core of it all (even when the concepts are hard to grasp) there is the notion of power, and how to wield it: finance and taxes are Baru’s weapons, and she employs them as such, waging battles that are just as nerve-wracking as sword fights.  Observing how Baru learns the ways of that power and how she understands to use it as the weapon it is, is a fascinating journey, although not an easy one, since everything comes with a price and this protagonist must steel herself to pay it – no matter what kind of currency is required of her.   Baru is fiercely driven by her ultimate goal, and there is no obstacle high enough or loss so devastating as to turn her away from her target – even though, at the end, I was both horrified and overwhelmed at the kind of choices she makes to remain true to her plans.

This is indeed the true hurdle I needed to overcome with this book, the pervasive sensation of a long-reaching yoke that cannot be removed, of a willpower that cannot be broken, of everyone fighting something that reminded me of Tolkien’s Elves’ “long defeat”: there are precious few rays of hope in this story that at times the going gets difficult.  When I read stories of vicious cruelty (the so-called grimdark novels), the savagery is all external, for want of a better word, expressed on the battlefield through swords and axes and blood. Here that cruelty is far worse because it’s subtle, the sword and axe hidden behind ledgers and edicts and laws that little by little become more smothering, more annihilating than a ferocious wave of invading, blood-thirsty barbarians.

Reading this book I was often reminded of a quote from a favorite show: “Fight them without becoming them”. This is what happens with Baru, she tries to hold on to her identity, to her diversity, while fighting the subtle, but equally ferocious, battle of encroaching doctrine: following her journey is a harsh, often bloody trek, and yet a compelling one.  Finding out how she solves that dilemma will shatter your soul.

But it will be more than worth it.

10 thoughts on “Review: THE TRAITOR BARU CORMORANT by Seth Dickinson”