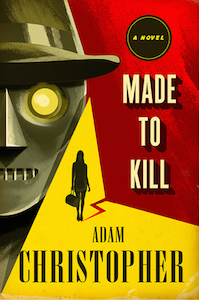 Made to Kill is the perfect example for the warning about not judging a book by its cover: although being aware of its existence, I never looked beyond the unappealing (for me) exterior appearance of the book, to inquire what it was about. That is, until the very positive review from a fellow blogger, whose comments piqued my interest.

This book is a curious mix between a classic noir novel and science fiction: Raymond Electromatic (the first name a clear nod toward Raymond Chandler) is a robot, the only one remaining after humanity decided to dispense with mechanical helpers, and he’s a self-employed private investigator – with a side activity as a hired killer. No one could image a more dispassionate, detached murderer than a mechanical creature, and Raymond fulfills this requirement most admirably, also thanks to his peculiar structure, one that requires a daily power recharge and the installation of a new memory spool. This 24-hour limit on Raymond’s storage capacity means he starts afresh every day as a new man – ok, robot – with no recollection of what previously transpired: no guilt, no danger of exposing one’s clients, plausible deniability.

Here is where Ray’s manager comes into play: Ada is a complex computer array tasked with running the office, taking care of the mechanical P.I., finding clients and managing finances. She is quite a character, and another nod toward the chandler-esque typical perky secretary acting as a buffer between her employer and the public. Apart from the human-like noises she emits – mostly puffing on cigarettes or swiveling on creaky office chairs – she’s graced by a quirky sense of humor and a sharp tongue, not to mention a keen business sense that is never clouded by emotional considerations of any kind.  Ada’s voice came through from the book’s pages much more clearly than Raymond’s for me: I enjoyed quite a bit her world-savvy practical approach to everything and the way she manipulates Ray who appears like very pliable putty in her capable hands, or circuits if you want.

The two move in a world that, despite some technological developments like robots, seems still very much anchored in the period between the ‘40s and the ‘50s – or at least this is the “flavor” I perceived from the book, that shares many of the tropes one could expect from a noir story from Chandler himself: dark ladies and shady characters move around in a Los Angeles still very much concerned with the Hollywood star system, and there’s a dastardly plot to be uncovered and neutralized, as Raymond runs through the city in search for clues.  Spies, night-clubs where dubious dealings go on while the music plays and alcohol flows, government agents and undercover operatives – they all make an appearance while Raymond applies his deductive skills to the complicated situation, and the whole scenario makes for a fast, entertaining reading.

My initial enthusiasm for this uncommon story did however flag a little past the book’s midpoint: while my interest remained the same about the story – after all I wanted to know what was behind it all and how the various threads would be resolved – the characters lost a little of their sparkle because of repetition.
For example, one of Raymond’s quirks concerns facial expressions: as a metal automaton, he does not possess a mobile face, of course, so from the very beginning of the novel we are told that all of his facial reactions happen on the inside – the first few times this information makes you smile, as do the offered similitudes for his attempts at a laugh or a cough or any human noise, but after a while and after reading about it a few times too much, the smile slowly fades and is supplanted by mild irritation.  The same goes for Ada puffing on cigarettes or the other behavioral traits she fakes when she wants to sound human. For me, these details are like a nice joke: once or twice it’s ok, but by the n-th time one hears it, it has lost its charm…

Another disappointing element came from the antagonists: even though I understand this story is modeled on period movies and books, I did not like the fact that the chief villain tends to laugh wickedly as he lays down his plans to a captive Raymond: I always wondered why the bad guys have this burning need to explain in full details their dastardly plots to a soon-to-be-killed prisoner. Need for recognition? Childhood traumas? Whatever it is, it always sounded phony to my ears, and here we have that in spades, mixed with that same villain’s endless laugh as he contemplates the upcoming success of world domination.

While I understand these are nothing more than personal pet peeves, I’m sorry that they detracted a little from the enjoyment of this unconventional and amusing book, that nonetheless was a very welcome change from my usual fare and is definitely worth a try.

A new post for the 2016 Sci-Fi Experience, an event hosted by Carl  V. Anderson over at Stainless Steel Droppings (follow the links to know more!)

21 thoughts on “Review: MADE TO KILL, by Adam Christopher”