This GoodReads group proposes a weekly meme whose aim is to give a list of Top Five… anything, as long as they are book related.  This week’s theme is:

Those books that have nothing to do with the story, or the cover model doesn’t look anything like the actual main character, or it’s a really cheesy cover for a great read!

To say the truth, none of the covers of the books I’ve read in the past few years were really misleading: when I went to check on my GoodReads library, I could not find any that would fit this week’s theme.  So I decided to do a little search for the covers of pulp magazines from a few decades back and there I found exactly what I was looking for.

In those times, garish covers were the accepted norm: monsters from outer space, outlandish aliens and extra-terrestrial landscapes, spaceships of every size and shape – you name it, they had it.

There was one common factor though: the women depicted on those covers were all scantily clad, exotic-looking and either terrorized victims of some evil-doer or being rescued by the muscled hero. And probably had nothing to do with the stories listed in the magazine.   Here are the Top Five that came out of my search:

In the first one, we see the lady on the cover being pursued by some bad guy and/or alien (he’s bald, and back then most aliens were bald…): they must be hovering in space, and both of their heads are enclosed by a bubble helmet, but while the man is wearing a space suit, the woman sports something close to a bathing suit, with a very, very deep neckline.  In vacuum…

In the second cover, our designated victim is stalked by a spidery-looking

alien and looking suitably frightened – but no fear! The hero is just around the corner, ready to save her!  And once again, the man is in full EVA suit, while the woman wears a golden bikini. With matching shoes.  After all, you can’t give up on fashion, even in the direst of circumstances!

Third cover – more of the same, with a slight variation: the woman is unconscious, probably terrified by the big-toothed, long-nailed (and bald!!) monster in the background.  Thankfully the hero is carrying her away to safety.  As if we could ever doubt it!

With cover nr. 4 there is a change: in this case the lady is armed and deadly –

in the picture she seems to have just stunned or killed the “big bad alien” (he’s green AND bald, to offer some variety, no doubt).  The woman’s weapon is still smoking (do energy weapons smoke at all?) and she looks quite resolute – yes, in her space bathing suit, complete with bubble helmet and spiked epaulettes. Oh, and gloves…

And finally, at nr. 5, another ass-kicking lady, swinging an axe against a many-tentacled monster, while the guy in the background seems to have some trouble defending himself.  The woman is wearing a full-body suit this time, but it seems painted on her, and the conical cups for the breasts look decidedly uncomfortable!

What’s worse, is that there are still some genres where covers with scantily clad people appear in absurd poses: that’s the reason why writers like John Scalzi and Jim C. Hines decided, some time ago, to poke some fun at those covers, while supporting a charitable foundation.  As a “bonus” for this week’s theme, here are both the original cover and the… portrayal by Scalzi (on the right) and Hines (on the left), but you can find more by following the links in this IO9 article. Have fun! 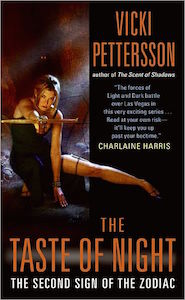