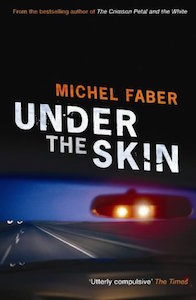 First things first, I want to thank fellow blogger Stephen Bianchini, over at The Earthian Hivemind, for showcasing this novel in one of his Teaser Tuesday posts, otherwise I might never have come across an incredibly intriguing read.

And second, I have to caution you that it will be next to impossible to review Under the Skin without spoiling its main plot concept, although I might add that the mystery at the basis of the story is revealed quite soon and that there are crystal-clear hints even before the actual disclosure, so I don’t believe that talking about it will ruin the journey of any reader – the warning stands though, so that anyone might decide how to proceed.

As the story opens, we learn that main character Isserley drives over the roads of rural Scotland in search of hitchhikers – a very specific kind of hitchhiker, brawny and strong, with little or no ties to community or family – for what’s clearly a heinous purpose: at first I thought she might be a vampire, or a serial killer, but little by little the accumulating clues revealed something totally different.  For starters, Isserley’s appearance is quite odd: she’s small, frail-looking, her face is strange and her eyes are hidden behind thick glasses that magnify them all out of proportion; her arms and legs are spindly and there are scars on her slightly-misshapen hands, but the strangest feature is represented by her breasts, whose size and fullness recall more the look of a centerfold playmate rather than that of the gangly creature flaunting them.

What’s more, Isserley grasp of language is sketchy at best and some of the more colloquial forms of expression (not to mention the Scottish brogue she encounters at times) completely fly over her head, as do some of her potential victims’ behavioral patterns: that’s because she is an alien, and her job is to collect viable male specimens to be fattened and slaughtered so that their meat can be sent to her home planet as a rare delicacy. From the few flashbacks we are afforded, we learn that Isserley’s place of origin is a barren wasteland where food and water are scarce, where even the few privileged live in a sort of aseptic seclusion, while the rest is sent to toil in the dreaded Estates, places that would make a penal colony of old look like a tropical resort.  Isserley has volunteered to be cruelly altered to resemble an Earth human (or as close to it as these alien minds can imagine, hence the huge breasts) so that she can act as a lure for the prey to be collected, processed and shipped home.

Hers is a life of agony, the original four-legged, furred appearance surgically corrected into a shape and posture that are unnatural and require constant exercise to keep the pain at bay; and also a life of loneliness, because the rest of the alien crew – the unmodified alien crew – looks on her as something to be pitied, something that is useful and productive, but is not human anymore.  Here is one of the mind-bending concepts of this novel: the aliens think of themselves as human, while Earth people are vodsels – unthinking, unrefined animals to be harvested and consumed, nothing more.  Isserley has chosen – volunteered – to undergo the transformation out of despair, and bears the pain and loneliness with a sort of detached acceptance that creates a surprising bond with the reader: more than once I felt sympathy for her, despite the horrible task she performs, because I could see how much a victim she is even though her role is that of the predator.

On hindsight, I believe that one of the reasons for my surprising reaction must come from the author’s stark, restrained prose: when he describes the aliens’ operation, even in its more crude details, the sober, almost clinical tone cushions his readers from the shock of it all, and his almost constant focus on Isserley and her thoughts places the ghastly reality of it all on the back burner, so to speak.  What in less skilled hands might have become a blood-and-gore account worthy of the worst splatter movie, turns instead this novel into a story that feels close to a disconnected dreamscape rather than harsh and disturbing reality, and whose emphasis is on what makes us humans, people capable of compassion and mercy – this last a word that takes a harrowing significance in one of the most chilling sections of the book.

Isserley is basically a person who has lost her identity and floats uneasily in a no-man’s-land of uncertainty she keeps at bay by fiercely concentrating on the job at hand: what looks like endless repetition of her everyday chores – cruising around, spotting potential subjects, taking them aboard her car and drugging them so she can carry the day’s load to the processing plant – is a way for her to forget who she was, who she is now and what her life has come to. That’s the reason for the huge upheaval that occurs when the wayward son of the operation’s boss comes to visit the premises and throws everything out of kilter. Amlis Vess is the typical spoiled brat of a wealthy family, one who has never had to struggle in his life, and so feels free to pursue his own ideals – including that of recognizing the rights of the “animals” his father’s company is fattening for the home planet’s market.  In this same way, he offers Isserley his respect (something she sorely lacks in her present situation) and maybe something more, helping her become aware of the beauty that surrounds them on this alien planet so different from their own, so that the fierce, violent way in which she initially rebuffs his approach is all the evidence we need to understand all that has been brewing under the thin veneer of Isserley’s apparent detachment.

Under the Skin is a story that goes well beyond the outward appearance of alien horror, the kind of book that stays with you long after you have finished reading it, because there is much more under the surface than meets the eye: I believe one of the meanings of the title is exactly this, that there are layers upon layers to us and to what we are.  It’s not an easy book, but one I’m glad I have not missed in my journeys.

22 thoughts on “Review: UNDER THE SKIN, by Michel Faber”