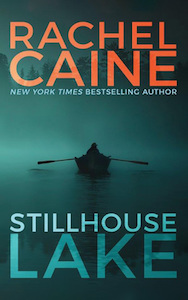 Sometimes it’s good to expand beyond one’s reading preferences, if nothing else to sample the skills of a known author in a different genre: it’s the case of Rachel Caine, whose Great Library books I quite liked and who choose to branch off into thrillers with Stillhouse Lake.  This is a genre I used to read extensively once upon a time, but have not visited for quite a while, and this novel helped in reminding me that you don’t need supernatural elements like ghosts, demons or vampires – just to quote a few – to instill horror in a reader: there are instances where plain, old human evil is more than enough.  If not downright worse.

Gina Royal believed she had the perfect life: a loving husband, two wonderful children, a good house and no financial problems. That is, until a freak car crash revealed the horror behind the façade: what went on in the garage where her husband Mel had built his off-limits-to-everyone workshop had nothing to do with do-it-yourself projects and everything to do with the abduction, torture and murder of a number of young women.  Arrested and tried as an accessory to Mel’s foul deeds, Gina was later found innocent by the law but not by the public opinion, so she was forced to change her name and try to stay ahead of the haters, always on the move, with the protection of her children as her paramount goal.

The titular Stillhouse Lake is a remote rural location where Gina – now Gwen Proctor, the latest in her assumed identities – seems to have found a modicum of stability for herself and her teenaged kids, fourteen-year-old Lanny and eleven-year-old Connor.  The years have marked them all deeply: apart from the aftermath of what they have called The Event that destroyed their entire world, their rootless life and the constant need to look over their shoulder, leaving as light a footprint as possible, have severely hindered the children’s normal growth.  Just imagine what it might mean for a modern teenager to have to limit access to the internet, or to a smartphone’s functions, not to mention the need to keep guarding one’s words so as to avoid dangerous slips of the tongue: Lanny and Connor had to learn to cope with their lack of friends and of a peer group to share experiences with.

Still, Gwen’s family seems to have finally found a sort of balance, a sense of home they have been missing in recent years, when the past comes crashing back on them with a vengeance: faced with the contrasting need of picking up stakes once again, or standing her ground and fighting for the right to have a normal life, Gwen will need to tap all her newfound confidence and courage if she wants to defeat old ghosts and provide as normal a future as possible for Lanny and Connor.

As I was saying, human cruelty easily provides more material for scary plots than your run-of-the-mill critter ever could: in this case we are offered a closer look on a kind of victim that’s frequently ignored when dealing with serial killers – the perpetrator’s close relatives.  Once a serial offender is discovered, there’s a question the general public can’t help asking: how could their immediate family not be aware of what was going on?  How could they not see the signs?  Gina/Gwen is a case in point: her husband Mel brought his victims to the family’s garage, where he proceeded to slowly torture and then kill them, and public opinion finds it hard to believe that she was unaware of it all. Yet, seeing things from her perspective, it’s easy to understand the hows and whys of such… selective blindness: for instance, Mel was outwardly the model husband and father, and only a few enlightening flashbacks show how his mask did slip now and then, and how a woman like Gina – one with a yearning to feel loved and needed – might have rationalized those episodes and closed her eyes to the deeper, darker implications of Mel’s behavior.  Moreover, a personality like Gina’s would be the perfect clay in the hands of such a skilled manipulator like Mel, whose depths of depravity surface only from the letters he sends her from the prison, messages where he reveals his true face with the abandon of someone who feels finally free from the need to hide the dominant side of their nature.

Learning the truth is both traumatizing and liberating: as we meet Gwen for the first time, she’s in a shooting range for the final stages of obtaining a handgun permit and we see clearly how she’s determined to take her life into her own hands, to be the one who makes the choices: as she says at some point, that trauma made her stronger and she will not go back to being Gina, weak and easily controlled Gina, any longer.

Another kind of darkness in this story comes from the people who refuse to let Gwen and her children rebuild their life, hunting and haunting them with the sins of the monster who shared their home: I’m not talking about the victims’ relatives, whose pain and rage is understandable but who very rarely transform their desire for revenge into concrete actions, but rather those ghouls who enjoy delving into bloody crimes, either by a form of morbid fascination or an unexpressed desire to emulate the killer (and from where I stand, the border between the two is frightfully thin…).  In Stillhouse Lake, these people fill message boards with their plans of exacting revenge for Mel’s crimes on his children, often graphically exemplifying such dreadful ideas, and not even realizing that their purported need for justice is indistinguishable from a serial killer modus operandi.  The anonymity the Internet offers to these individuals, the possibility to express the foulest of thoughts with impunity, is something we can observe daily with various degrees of intensity, and it offers a gloomy commentary on the general status of the human soul…

Besides these interesting psychological observations, Stillhouse Lake is an intense, gripping story that makes for a compulsive reading and ends with surprise development that will carry the story into the next book with undiminished momentum.  No one could ask for more in a suspense-filled novel.