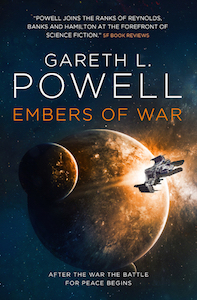 When I started reading the synopsis for this novel, as soon as I reached the words “sentient ship” I stopped paying attention to any other detail, since this has been a favorite theme since the times of my long-ago encounter with Anne McCaffrey’s stories, and more recently with the Leviathan Moya of the acclaimed tv show Farscape.  And once I discovered that in Embers of War the ship Trouble Dog is not simply sentient, but enjoys its own first person point of view, I knew I was in for a delightful experience – but I’m getting ahead of myself, so let’s proceed with order…

The action takes place in what feels like a distant future, when humanity has been discovered by and welcomed into a sort of galactic federation called the Multiplicity: such enlightened company has not changed humans very much though, and therefore the story opens on the final stages of a brutal conflict between two factions, the Conglomeration and the Outwarders.  The former, knowing the war might go on for a long time with heavy casualties on both sides, decides to strike a massive blow against its opponents and causes the total destruction of a planet covered by a sentient forest, where Outwarder and Conglomeration forces are locked in endless guerrilla skirmishes.

Years later, Captain Sal Konstanz commands a vessel of the House of Reclamation, an organization devoted to the rescue of endangered spacers, and her ship, the Trouble Dog, used to be one of the vessels tasked with the annihilation of Pelapatarn, the planet destroyed in the prologue: the ship, gifted with sentience thanks to a mix of technology and human brain cells, feels the need to atone for its past actions (evidently not subscribing to the easy alibi of “I was just following orders”, as many humans do) and believes that working for  the House of Reclamation is a start to balance the lives lost to wartime destruction.

The House of Reclamation is indeed a fascinating concept, a mix between the Red Cross and the Foreign Legion, where one’s past and previous affiliations cease to matter and the only goal is that to save lives.  For this reason they are not subject to any one planet or system’s laws and they are free agents commanding respect from all factions thanks to their humanitarian goals.   This does not mean, however, that they are immune from dangers, and as the Trouble Dog is called to render aid to a liner that was attacked while exploring a peculiar group of planets called ‘the Gallery’, ship and crew find themselves in the crosshairs from competing factions poised to start another conflict.

Besides Sal Konstanz and her crew – former Outwarder soldier Alva Clay, the alien engineer Nod and the young, inexperienced medic Preston Menderes, who’s been assigned to the Dog after the demise of the previous doctor – the story’s points of view include poet Ona Sudak, a passenger on the attacked liner and also a woman with a dark secret in her past; and Ashton Childe and Laura Petruska, respectively a Conglomeration and Outwarder agent.   Their individual paths converge on the Gallery system, a group of planets that a mysterious alien race carved into bizarre shapes and where a chance find opens a portal toward a distant part of the galaxy and the encounter with an old alien race.

This is a story that moves forward at a very good pace, thanks to the author’s narrative skills in keeping the action rolling, and his choice of alternating between the main points of view while having each of them relate the events in the first person, thus giving a more hands-on perspective to the whole scenario as he builds the individual characters. If there is a common bond between these different individuals (and I count Trouble Dog among them) is the strong need for redemption, or freedom from their inner ghosts – or both: for example, Captain Konstanz’s life is dotted with losses, so that she works to save lives to balance those that were taken from her, and sometimes the struggle becomes so painful that she needs to physically retreat from everything and everyone, to elaborate her pain in solitude.  Ashton Childe is profoundly disillusioned by his life’s choices and believes that his current assignment as a spy and military adviser in a far-off conflict is leading nowhere, crushing him under the weight of uselessness and despair.  Or again young Preston is desperately trying to live up to his father’s standards, and doomed to failure by devastating psychological problems.

Still, the most interesting character remains that of Trouble Dog, formerly a Conglomeration ship of the Carnivore class (interesting denomination, this one…) and part of a pack of similar ships built for speedy ruthlessness of action: witnessing the destruction of Pelapatarn and its living forest, knowing that in the massacre uncounted lives were lost, besides the age-old sentient trees, changed its attitude – or probably the growing and learning human brain cells implanted in its systems realized the full consequences of the Carnivores’ strike, and reeled from it in horror.  Nonetheless, despite having now dedicated itself to saving lives instead of taking them, Trouble Dog perceives that its feral instincts are not vanquished, but simply dormant, ready to be awakened in defense of its crew and the people it rescues: I loved how the Dog acknowledges its dual personality, the streak of ingrained violence existing alongside more noble feelings, and how it manages to make them work for the good of the crew through a very creative application of computerized logic.

The ship’s twofold nature is also a good mirror for the story itself: on one side we have action scenes and a plot whose tension grows with the turning of each page as the characters converge toward a well-crafted peak of confrontation and discovery; on the other we are made privy to many inner struggles to protect the life choices they made without jeopardizing the nobler pursuits of their new existence.  The result is a captivating story led by interesting characters, and two of them stand out for very different reasons: one is the alien engineer Nod, whose extreme focus on his job and his spiritual goals make him probably the most stable personality aboard the Trouble Dog, and whose manner of speech – or rather, thought – is a delightful combination of single-minded innocence and affectionate mocking of his human companions’ perceived quirks.  The other is the poet Ona Sudak: even before discovering what lies in her more than checkered past, I could not relate to her because she seemed too detached, too coldly calculating to really make a favorable impression on me; and as the story progressed, I found that I ultimately disliked her.

In the end, Embers of War is revealed as an introduction to a more complex plot, one that will develop over the next books in the series: here we are given glimpses of an age-old alien mystery and of the way it might impact on the present – and very volatile – situation.  Consider me quite intrigued and firmly on board for the rest of the journey…