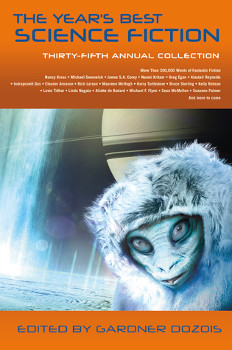 Short stories’ collections always offer a mixed bag, at least according to individual tastes, and this eclectic anthology proved to be no exception: there were stories that did not speak to me, others that were nice but did not compel me toward a review, and then there were those that gave me that something extra that made all the difference.  Here is the last one of the stories from this anthology that I chose to review:

If you are a fan of Martha Wells’ MurderBot and of sweet Wall-E like I am, you will enjoy this story very much: it’s a bittersweet tale of a mechanical construct that was part of an expedition on an alien planet, seeding it (through a process that somehow made me think of laser printing) with appropriate life to establish a suitable eco system for human settlers.

Something must have gone wrong, though, and Kadey (the nickname for KED-5) recollects how its crew suddenly abandoned it, with the exception of mechanic Mike who remained on planet until illness took him away: puzzled for the desertion, and still feeling the loss of Mike, Kadey still goes on with its work, introducing newly-minted fauna into this this world during the day, and going into energy-conservation mode at night – see where I derived my resemblance with Wall-E?   And like the little garbage collecting unit from the animated movie, Kadey does feel the loneliness, in its own way, especially now that there is no Mike to share thoughts with and to make sense of the details that escape a too-logical mind.  At some point it needs to be awake at night to check on some strange happenings, and it’s on this occasion that it notices the stars in the alien world’s sky, and decides to give the constellations a designation “I name one group The Wrench, and another Coffee Mug. Mike would have approved; I rarely saw him without one or the other in hand.”  If that is not enough to make you root for Kadey, I have no idea what would…

But the unnamed planet is not as bereft of life as the expedition crew believed, and curiosity sends Kadey on a journey of discovery that will give it more answers than it’s able to process, and also offer a few unexpected, incredible revelations.

I loved this little story quite a bit, and I hope to see Suzanne Palmer’s name again, maybe on a longer work: something tells me it will be a very enjoyable experience.