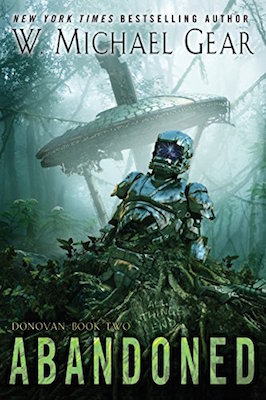 Approaching the second book in a series, when I’ve greatly enjoyed the first one, always causes me some hesitation, because sometimes it means embarking on the road to disappointment: such was definitely not the case with Abandoned, Michael W. Gear’s second volume in his Donovan Trilogy following and expanding on the footsteps of its predecessor Outpost.  I’ve always been partial to novels dealing with the colonization of alien planets, and in this particular case the world of Donovan is a fascinating one.

Imagine a wild, quasi-tropical world graced with a variety of flora and fauna that would be a dream come true for any scientist and a virtual paradise for any colonist: this is indeed Donovan, although the other side of the coin is a deadly one.  Nature on this planet is aggressive in a major way: the animal life is more often than not of the predatory kind, starting with the quetzals – a sort of dragon-lizards gifted with incredible speed and an insatiable hunger, situated at the very top of the food chain; vegetal life, on the other hand, tends to constantly encroach on human habitation, making any kind of cultivation a constant struggle – that is, when people are not falling prey to moving constrictor vines and similar other dangers.

Since the first waves of colonization, the Donovanians have been more or less on their own, due to the dangers of space travel and the strong possibility for a ship to be lost in the inter-dimensional medium it uses to cover vast distances.  Their numbers have been dwindling constantly, as have their resources, and the survivors have developed a very independent, very strong-willed society that has grown distant from the Corporation that financed their expedition: when in Outpost a ship finally reaches Donovan, the clash between the colonists and the Corporation representative Kalico Aguila adds a new level of danger to the harsh life of Donovan.

In Abandoned, after the departure of the Corporation ship Turalon – going back to Earth to report on the progress of the colony – we see Aguila trying to extract the planet’s abundant mineral resources while having to adapt to a society she was not ready for. For their part, the colony’s leaders are dealing with the usual survival problems in addition to those created by the influx of new colonists, among whom there are several unsavory characters, first of them the insidious Dan Wirth, the psychopath who turned from colony recruit to property owner in the blink of an eye, mostly thanks to his ruthlessness.

What makes Abandoned a worthy sequel is the author’s choice to split the narrative focus between the known characters and situations in Port Authority – the main landing site – and a new point of view, that of former marine Mark Talbot: together with two comrades, he finds himself lost in Donovan’s jungle and at the death of his friends has to face alone the dangers of the wild until he reaches shelter in a research base situated deep in the forest and thought abandoned by everyone.  Here Talbot finds not only a family but also a group of people who have learned how to survive – not fighting against the planet ecology, but trying to reach a symbiotic relationship.

This is truly the main theme of this story, the need to adapt to a new environment rather than trying to bend it to one’s needs, to use your energies trying to build something rather than constantly fighting against obstacles: Aguila’s losing battle against the encroaching forest that keeps growing back despite the herculean efforts of her people is the emblematic proof that Donovan has a mind of its own and it’s not going to change it, no matter what the “invaders” do, while the people living at isolated Mundo station have understood long ago that a sort of compromise with the planet is the key to survival – a lesson that takes a terrible turn for the worse once that fragile balance is shattered because of a mean-spirited action from one of the Marines.

Characters remain a strong element in these novels, and the way they change over time and with the influx of new experiences makes reading them just as compelling as following the events themselves: while Talina Perez, the colony’s  security chief, is not the central focus here as she was in Book 1, we see her dealing with loss and grief and with the unexpected consequences of sharing the DNA of the quetzal who attacked her; what feels like an invasion, and a constant alien presence in the back of her mind, turns out to be something else and it will be interesting to see how this pans out in the long run, especially in light of the other discoveries we made about Donovan’s forms of life.  Kalico Aguila is the one who exhibits the strongest changes, and I like the way the author shows the slow progression of her attitude from distant Corporation executive to full member of the community, as I like the way she and Talina are growing toward… well, becoming frenemies rather than remaining all-out adversaries.

The new point of view of Mark Talbot is one that simply begs to sympathize with him, thanks to the descriptions of his struggles to just stay alive in the jungle, and his growing despair as he has to face Donovan’s perils all alone. It’s just as easy then to share his puzzlement once he reaches the safety of Mundo station and is met with a nine years old child who acts like an adult and treats him like an idiot before introducing him to her extend family – and safety.   Young Kylee, and her pet quetzal Rocket, are both a mystery and one of the keys to the humans’ possible survival on Donovan, and the way events develop (or rather crash and burn) for this part of the story have thrown a huge pall of concern over me because of the implications for the future.

Which is the main reason that the third and final book in this trilogy will not be published soon enough for me, and let’s not forget that in the whirlwind of all that transpired in Abandoned, there is one huge missing piece of the puzzle that has been shuffled to the sidelines: what happened to the ghost ship Freelander, now in orbit around Donovan with his cargo of bones from its passengers and crew.  Something tells me that this proverbial “elephant in the room” will play a part in what’s to come next, and I can’t wait to see where the author will lead us next.