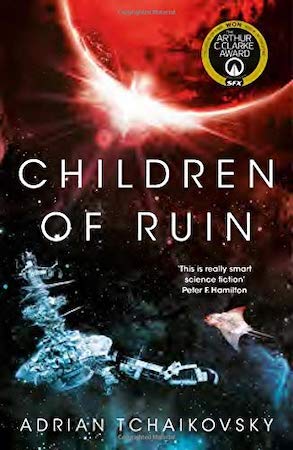 I received this book from the publisher, through NetGalley, in exchange for an honest review: my thanks to both of them for this opportunity.

When I approached this novel’s predecessor, Children of Time, I did so with some apprehension, since I’m mildly arachnophobic and the main characters in that story were indeed spiders: imagine my surprise when Adrian Tchaikovsky’s writing not only made my fear a moot point, but compelled me to root unabashedly for the eight-legged heroes of his saga…

The previous novel ended with a hint that there could be further territory to explore in this universe, whose most fascinating element comes from the fact that uplifted creatures are now the more populous, more advanced species, and mankind is still struggling with the aftermath of its civilization’s end. Children of Ruin starts where book 1 ended, with a mixed group of scientist – arachnids and humans – embarked on a voyage of discovery for new frontiers.

Like book 1, this sequel follows two different timelines: the ‘present’ aboard the ship Voyager with its mixed crew, and the more remote past, where a group of terraformers has to deal with the collapse of human civilization and the realization that they might be all that is left of mankind.  With a storyline that somewhat parallels that of the evolution of new intelligence on Kern’s World, home of the spiders, one of the scientists on the ship Aegean uses Dr. Kern’s uplift virus on his octopus specimens to create a viable race for the water world he’s focusing on, thus creating a new intelligent species.

As eager as I was to learn more about the arachnid-human association and their journey of exploration, together with the marvels of the organic ship they traveled on, Children of Ruin did not work for me as well as the first book in the series did, partly because of what I perceived as a form of pattern repetition, and partly because of pacing problems.  Still, I’d like to start with what I enjoyed in this new story.

The alliance between the survivors of mankind and the uplifted spiders is one that works but still needs to bridge many differences, chiefly where inter-species communication is involved: that was one of the most fascinating elements in this novel, with characters endeavoring to find the best approach – either simply linguistic or more mechanical – to understand each other without the mediation of the Kern personality residing in their computer.  And of course there are still the compelling arachnid social dynamics, where the females assert their dominance while the males struggle to obtain recognition in what I perceived as a pointed commentary worked through an interesting role reversal.

The human terraformers offer another thought-provoking perspective, especially in their reactions after the protracted silence from Mother Earth leads them to a dismal conclusion. They all appear as self-centered individuals, more focused on their scientific goals than on building a cohesive group so far away from home – in other worlds, an echo of Avrana Kern, multiplied by five, which made me think often about the author’s overall negative vision about humanity.

Then there are the octopuses, whose journey toward increased intellect somewhat parallels that of the spiders, but of course with substantial differences due both to their nature and to the liquid environment they live in, which offers fascinating angles in the creation of their society and its evolution, both planet-side and in space. For example, there are two curious details that stuck to my mind: one is that being boneless octopuses don’t suffer from the bone deficiencies that plague spaces after a prolonged permanence in microgravity; and two, for creatures that can move in several directions, there is no concept of ‘up’ or ‘down’ to upset directional perceptions as it happens to humans.

All of the above elements intrigued me of course, together with the addition of a new kind of creature bent on assimilating other forms of life to understand them, which added further pressure on the already tense situation between octopuses and the explorers from Kern’s World. Still, the octopuses’ evolution did not feel as compelling as that of the spiders in the first novel, and there was a great deal of space dedicated to their biological and psychological progress that felt more like a textbook than a work of fiction, lacking the irresistible quality of the evolutionary saga of the arachnids. Where I cared – so surprisingly, given my bias – for the way the spiders evolved in the course of the millennia of their history, I could not feel equally engaged with the octopuses’ journey, and what’s worse I could not feel any connection with the spiders featured in this novel: this perceived remoteness on my part was the main reason I was not invested in this story as I was with the first book.

Much of my reaction could be ascribed to the lack of novelty compared with its predecessor, since I could not erase the feeling of “been there, done that” that plagued me for most of the way, and moreover the overall plot gave off the feeling of being artificially intricate, lacking the beautiful, clear progression I enjoyed with Children of Time, which does not mean I did not enjoy this story but that I feel how a more… streamlined narrative would have worked better for my tastes.

I’m glad I read this, but nonetheless I can’t avoid the consideration that sequels often thread on dangerous ground, and this one might not have always successfully avoided the pitfall of such ground.

20 thoughts on “Review: CHILDREN OF RUIN (Children of Time #2), by Adrian Tchaikovsky”