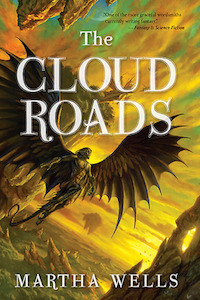 I’ve been aware of this series since the appearance of the first book, and I’ve kept reminding myself to see what it was all about every time I saw news about the release of a new installment or a positive review, but as it often happens I kept procrastinating in favor of other books: now, mostly thanks to the enthusiastic review of a fellow blogger, I’ve decided it was high time.

The first volume of this series introduces the readers to a peculiar world divided into three realms and peopled by a wide variety of beings: all of them are humanoid looking but show some differences in coloring and appearance that make us realize quite soon there are no humans as such on this world, a place where plains and mountains give way to rivers and seas and even offer the breathtaking spectacle of floating islands, that reminded me of some amazing vistas from James Cameron’s Avatar.  Apart from the weird creatures that can be found on land, water or air, there are two big groups of sentients: the groundlings, those who most resemble baseline humans, and the Raksura, winged and tailed crosses between lizard and human, who can shape-change from flying configuration to a wingless, groundling-like form.

Moon is a Raksura, but he’s not aware of his true nature: he’s been living on his own since the rest of his family group was killed by predators, and he has tried to live with groundlings, only to have his shape-shifting ability revealed every time, so that he ended up being evicted from the groups he had tried to blend in. The conflict between his desire not to be alone and the fear of inevitable discovery has shaped his attitude into a sort of bitter disillusionment that manages to keep him apart from others, even when he’s temporarily part of a community: for this reason, once he comes into contact with another Raksura for the first time, he’s quite distrustful about accepting the stranger’s offer of joining a proper court and finally be with his own people.  Stone, that’s the name of the scout sent by Indigo Cloud court in search of new members to refresh the bloodlines, does not take Moon’s initial ‘no’ for an answer and urges him to at least see for himself what he’s missed until now. Unfortunately, the two’s visit to a neighboring court reveals the threat from the Fell, a kind of feral Raksura with a cruel, predatory attitude.

This event, in addition to Moon’s earlier encounter with the Fell, and the painful memories tied to it, about which we will learn much later in the course of the story, convinces Moon to lend his aid to Indigo Cloud, at least temporarily: part of his unwillingness to offer a permanent commitment comes from his ingrained diffidence, but there’s another factor weighing in, the discovery of his nature as a consort, the rare kind of Raksura who can mate with a queen to give birth to other Raksura or their wingless brethren, the Arbora.   There’s an interesting consideration to be made here, and it’s one of the fascinating aspects of this story: Raksuran society hinges on a role reversal, where the queens hold all the power (even that of keeping individuals from shifting into winged shape) and the male consorts possess a role quite similar to that of concubines in a harem. The courts’ organization closely resembles that of an ant- or bee-hive, with the different roles – mentors, warriors and so on – established by birth.

The depiction of Raksuran society, together with the vivid descriptions of the world in which the story unfolds, are the backbone of this novel and the most fascinating aspect of it, while the steady pace keeps the story flowing at a good speed. What’s interesting here is that we see it all through Moon’s eyes, and since it’s all new to him, we share in both his wonder and puzzlement.  The author has managed to convey the same insights one might gain from a first-person perspective while keeping the narrative in the third person, although tightly focused on Moon’s point of view.  He is an interesting character, a grown adult – at some point we learn he’s around 35 – but possessed of some traits belonging to a younger person: it’s clear that his life of solitude has not allowed for a full psychological development and that he’s still searching for himself, more than for a stable home. That’s why, I think, the discovery of his possible role as consort seems fraught with negatives: while solitude has been a burden throughout his existence, Moon does not look ready to give up his independence in favor of a permanent home and some creature comforts, and his first meeting with Pearl, the ruling queen of Indigo Cloud, does not help his skittishness at all.   The impending threat from the Fell puts these troubles on the back burner, however, and Moon finds himself confronted with the need to help his newfound allies (and maybe family) deal with a danger that swiftly turns into “clear and present” mode.

While I totally enjoyed the book, and will certainly read on, the story is far from perfect: the action is swift and engrossing, the world-building amazing and at times quite cinematic, but characterization – apart from the central figure of Moon – feels somewhat sketchy.  For example, Stone, Moon’s mentor and guide, or Jade, queen-in-training and possible mate, are not fully fleshed out but seem to be there only as props for Moon’s journey of discovery of his true nature: I could not get a sense of the persons behind the characters, and that made me feel as if something important was sorely missing.  I wanted to know what made them the way they were, how they had come to that point, just as I could more easily understand what makes Moon tick.

Apart from this small disappointment, that I hope will be assuaged in the future course of the story, The Cloud Roads is a fascinating tale set in an intriguing universe, one that I will certainly enjoy exploring further.

10 thoughts on “Review: THE CLOUD ROADS, by Martha Wells (Books of the Raksura #1)”