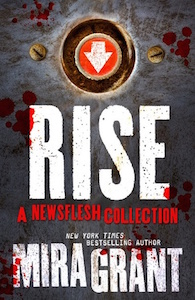 After I finished reading Mira Grant’s last  volume in her Newsflesh trilogy about the aftermath of a zombie apocalypse, I wanted to know more about the changed world resulting from the rising of the dead, and discovered two short stories that acted as a prequel to the events described in Feed: one was Countdown – the story of how two independent viral researches combined into the infection that caused the dead to rise; and the other was San Diego 2014: The Last Stand of the California Browncoats – a look on the first few days of the outbreak from the point of view of the participants to a sci-fi convention.

With time, these two stories were joined by a couple of novellas, How Green This Land, How Blue This Sea – set in a post-outbreak Australia, and The Day the Dead Came to Show and Tell – a tale of the post-Rising world focused on a group of school children and their teachers.

When the author announced she was going to publish a book that would gather all this material and a few new stories, I knew I had to read it: Mira Grant (the alter ego of UF writer Seanan McGuire) is an amazing storyteller and I was looking forward to more about this dystopian version of our world, either revisiting the older stories I did not review at the time, or enjoying the new ones.

Countdown is indeed the tale about how it all began, how the seeds for the end of the world as we know it were sown, marrying human desire to cure both big and small ailments and the equally human stupidity of acting without thinking about consequences.

In Denver, Colorado, Dr. Wells is satisfactorily progressing with his experimental cure for cancer that uses a mutated strain of the Marburg virus to attack cancer cells and truly give a second lease on life to his patients. He’s checking in on one of his youngest patients, 18-year old Amanda Amberlee, who’s looking forward to her prom night and finally enjoying the freedom of simply being alive.

In Reston, Virginia, Dr. Alexander Kellis is conducting experiments on monkeys and guinea pigs with his miracle cure for the common cold: it might not look as ground-breaking as his colleague’s research into cancer, but alleviating even something as banal as a cold would greatly improve mankind’s living conditions.

In New York, journalist Robert Stalnaker writes an inflaming editorial concerning Dr. Kellis’ work, claiming that the cure will be available only to people with means, and calls the scientist’s efforts a “money scam”, reveling in the huge response – both positive and negative – the article receives.

And finally in Allentown, Pennsylvania, Brandon Majors, “self-proclaimed savior of mankind” decides to start a crusade that will result in the destruction of Dr. Kellis’ lab, the dispersal of his as yet not-fully-tested cure in the atmosphere, and its interaction with the Marburg-Amberlee cancer-fighting strain.

Countdown does not only lay the basis for the zombie apocalypse and its aftermath, but also shows the failure of institutions and media in keeping the public informed about what is really happening, in a last-ditch effort of containing the inevitable by burying everyone’s heads under the sand.  This is the point from which independent bloggers will take up the slack and fill the niche left vacant by more traditional information channels: one of the more interesting narrative threads concerns indeed Georgia and Shaun Mason’s adoptive parents, both teachers at the time of the Rising – they are pictured as normal people having to face extraordinary circumstances, showing the first glimmers of what they will become in the immediate future.

There is a sense of inevitable doom hanging over this story, of an unstoppable chain of events that will lead to an explosive climax, and knowing beforehand what’s going to happen only enhances the power of this tale of how the Rising came to be.

8 thoughts on “Novella Review: COUNTDOWN, by Mira Grant (from RISE: A Newsflesh Collection)”