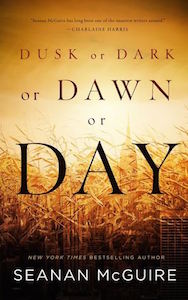 Seanan McGuire is not only one my favorite authors, she is a natural-born storyteller – and that might be the very reason I enjoy her powerful writing so much. This is her second novel I’ve read that deals with ghosts (the first being Sparrow Hill Road), and although there is no connection between the two stories – except for the presence of ghosts, of course – the tie binding them together is the way McGuire handles the emotions connected to death and the afterlife.  The stark directness of her descriptions, the lack of any concession to morbid thoughts or easy sentimentality, make this story compelling and its characters unforgettable.

Ghosts are created when people die before their allotted life-span, so that they still move among the living – often in deceptively corporeal form, enough to be undistinguishable from the rest of humanity – until they have reached the amount of years pre-programmed, so to speak, into their existence: ghosts possess the ability to take time from the living, so prolonging an individual’s permanence on the Earth and at the same time shortening the giving ghost’s stay in limbo; they can also give time back, though, as a form of punishment for those who are deemed undeserving.

This intriguing premise has a negative side, though: witches (yes, there are witches moving among us, and some of them are bad) can trap ghosts inside mirrors and use them as a veritable fountain of youth, either for themselves or for anyone willing to pay for the chance of many more healthy, vigorous years. Even being dead does not free one from the dangers of human greed, it would seem…

Jenna is a ghost: once a small-town girl, she literally ran to her death shortly after her beloved sister Patty’s funeral.  Patty had moved to New York in search of a better life and, like many other disillusioned young women before her, choose suicide as a way of escape from her broken dreams.  Once dead, Jenna did not meet again with Patty – who, in all probability, was fated to die when she did – so she’s now going on as a ghost, working as a part-time waitress and as a volunteer at a suicide help line, where she earns time by helping people at the end of their endurance.   Decades of this routine almost-existence are profoundly shaken when it becomes clear that all ghosts in New York have disappeared, and Jenna decides to take action, shaking herself out of her unconscious complacency and finally facing her own… well, ghosts.

The actual plot at the core of this novel felt less important, to me, than the intriguing ideas and characters that supported it, starting with the whole concept of ghosts as indentured workers needing to serve their whole time before being set free: life is somehow compared to a form of duty one needs to fulfill before being allowed to move on.  That felt like one of the strongest arguments against suicide I remember reading, one that feels both right on its own merit and devastatingly clear in its simplicity.   Indeed Jenna, who still mourns the loss of her sister Patty, understands how her own accidental death squandered her potential, so that she feels the need to earn every single minute of time she gains, and more often than not chooses to donate it to someone in need.

Jenna is an intriguing character, because all throughout the story she appears somewhat detached from it all – not because she is a ghost among the living, but because it seems that she’s trying to protect herself from feeling too much: the loss of Patty, of the strongest emotional bond she had while living, left her apparently unable to form any meaningful connection with other people, either living or dead. It would be easy to classify her as cold and aloof, if it were not for the small group of friends she has gathered around her, the real mirrors of her personality: fellow ghost Delia, the landlady of the building Jenna lives in, a sort of mother figure for both living and dead in the community; corn-witch Brenda, the guitar-playing manager of the coffee shop Jenna visits regularly; or homeless Sophie, her muttered ramblings a cover for something deeper.  All of these equally fascinating characters show us who the real Jenna is by reacting to her with care and sympathy, making us understand that there is more to Jenna than meets the eye, even if she is the one telling the story and therefore being something of an unreliable narrator, up to a point.

What ultimately Dusk or Dark or Dawn or Day is, is a contemplation of life an death, of the meaning of both, and the way we face them.  There is a quote that showcases what I most appreciate in this author:

Statistically, women are more likely to go for poisons than men are. We don’t like to leave a mess. We spend our whole lives learning how to be… how to be as neat and tidy and unobtrusive as possible, and then we go out the same way.

No preaching, no lengthy sermons, but a simply effective bluntness that’s one of McGuire’s landmarks and the reason I’ve become such a staunch fan in a relatively short time.  This might not be one of the “happiest” stories you might find, but it’s one that will make you think, and that’s always a plus in my book.