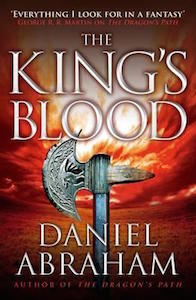 Despite my best intentions (road to Hell and paving stones…) I waited almost a whole year before returning to Daniel Abraham’s fantasy series, and now that I’ve read this second volume I hope I will not make this mistake again, because what looked quite promising in book 1 has turned here into a well-crafted, compelling story peopled with characters whose further definition becomes pure reader’s delight.

The King’s Blood resumes where The Dragon’s Path left, following the characters that were our eyes and ears in this world, although none find themselves at ease in their own circumstances: Cithrin bel Sarcour, the former ward of the Medean bank, has managed to create her own branch in Porte Oliva – thanks to the funds successfully saved from the destruction of the Vanai branch – but finds herself under the thumb of an auditor from the central headquarters, a woman with an accountant’s small mind and no flair for the risks that have made Cithrin such a formidable banker. Marcus Wester, former soldier and now Cithrin’s bodyguard and protector, is also chafing in the role of enforcer for the Porte Oliva branch, and while he’s devoted to Cithrin and her well-being, he’s somewhat unhappy, victim of a formless restlessness he’s not yet ready to acknowledge. Dawson Kalliam, one of the chief advisors of Antean king Simeon, has managed to prevent the coup that would have killed the king’s son and heir and put Antea at the mercy of their nearest neighbor, but Simeon’s failing health and the shifting political landscape force him to revisit his loyalties and question his principles.  And Geder Palliako, the young, ridiculed nobody that proved instrumental in defusing the attempted coup, and who rose to an unpredictable position of power, finds himself with an even heavier burden on his not-so-strong shoulders…

More than the first volume of this series, this second installment drew me into the world Daniel Abraham created: where The Dragon’s Path had the responsibility of introducing the readers to Antea and the main characters, The King’s Blood is able to solidify this background, conferring it a much-needed width and depth, and it does so not so much through lengthy descriptions and verbose information, but by having the characters interact with the world itself, by allowing the reader to observe it through their eyes and their different points of view.  Following their journey, being part of their thoughts and experiences, we see this place in all its complex richness and in its different aspects: from the bustling commercial chaos of Porte Oliva to the royal seat of Camnipol to the open vistas of the wilderness marked by the ancient jade dragon roads, this is a place that comes to life as if it were another character, with its changes in personality and looks.

And characters are indeed the strong point of the series, carrying and advancing the plot in a beautifully organic way, and always surprising the reader, the case in point being represented by Dawson Kalliam: in the first book I had him pinned as something of an authoritarian, someone with an eye always turned toward past and traditions, but as the story progressed I felt some growing sympathy for him, understanding how his attachment to honor and duty defined him.  Here he finds himself faced with some difficult decisions and a very questionable choice that – despite its dire consequences – invests him with the deep humanity that I felt was somehow missing from his makeup.  Much of it came of course from the interactions with his wife Clara, whose direct POV is introduced in this novel to my great appreciation: Clara is an amazing character, because while she adopts the deferential role assigned to women in this society, she is a very able and subtle mover and shaker, and finally in this book her skills and intelligence are showcased as she deserves.  There is a sentence where the author seems to foreshadow this, and it’s one that made me smile in appreciation when he wrote that “smoke seeped out of her nostrils like she was some ancient dragon hidden in a woman’s flesh”. Clara is indeed a dragon lady, and I look forward to seeing how her story will move forward.

On the other hand, Marcus Wester feels… diminished, for want of a better word: here is a man who needs a mission to truly feel alive, and he now feels that Cithrin has no further need of his protection, so that he’s now almost adrift in a sort of limbo.  It does not help that he has not resolved his feelings toward her, because if he started seeing her as the image of his long-dead daughter, there are moments when he seems to view her in a different way.  This inner conflict results in a rash decision subverting his long-held principles and pitting him against his second-in-command and longtime friend Yardem: what will come out of this development still remains to be seen.  And Cithrin herself is in a state of flux: no more the sheltered ward of the Medean bank, no more the frightened young woman protecting the precious cargo from doomed Vanai, she needs to grow into her own skin and finds herself hemmed in between the contemptuous attitude of the bank’s auditor and Marcus’ solicitous protectiveness, and is clearly chafing at both. Her solution to the impasse will bring her on a path that, so far, only planted a few seeds whose growth I’m eager to see.

But of course the main focus of interest remains Geder Palliako: there is nothing more dangerous than a man with a grudge given a position of power, and Geder possesses a long list of grudges indeed. If in book 1 I saw the danger of his giving in to the need for retribution, here he positively frightened me: he is a man who has lived most of his life in loneliness, and with little experience of the outside world, and now he wields enormous power, a power he’s afraid of, making him the easy prey of advisors with their own agenda. It’s difficult to pinpoint my feelings for Geder, because if at times I feel deep compassion for him, for what his life was before, and if I see the profound loneliness afflicting him – one that’s expressed in his easy, almost-brotherly relationship with young prince Aster, probably the only person he feels comfortable with – still I can’t help but recoiling at the unthinking carelessness about the consequences of his often merciless decisions. On one side there is the frightened, isolated young man, and on the other the dangerous monster he’s becoming, and as a reader I kept oscillating between these two extremes without being able to choose how I really felt.

As these amazing characters move forward with their individual journeys, the story keeps building up details, both big and small, that are clearly going to have far reaching consequences: the best feature of this series, as far as I can tell after the first two books, is the sensation that the author is placing his pieces on the board and that the game will gain in complexity and depth as it progresses.  Already The King’s Blood feels more complex and more focused than its predecessor: if this trend keeps up, I know that there is an engrossing story waiting down the line – and this time I will do all that I can to discover it as quickly as possible.

12 thoughts on “Review: THE KING’S BLOOD (The Dagger and the Coin #2), by Daniel Abraham”