The Baen Free Library is a section of the Baen site where a good number of books is offered for free download, as a way to sample authors and their works.  During one of my visits, I discovered the existence of a series of short stories collections, grouped by year of publication: as it often happens, anthologies can be mixed bags, but I found a few stories that truly caught my attention: in my next posts dedicated to shorter works I will review the ones that I liked most in this collection from the best of 2017. 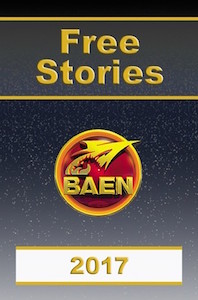 The first story to catch my undivided attention in this anthology is one featuring the exploration of Mars: with the increased interest focusing toward the red planet in recent times, it’s only natural that so many works would choose to set their background on it.    The titular Feldspar is a remotely-operated rover, one of many landed on the surface of Mars to collect ores and carry them to a big smelter working to provide the necessary materials for the colonization effort: these rovers’ handling has been turned over to very committed and enthusiastic workers – gamers from all over the world who bought the operating rights to their rovers and became the “most dedicated workforce on Earth”.

Blake is one of those gamers-turned-operatives and through Feldspar he’s contributing to the effort of Project Regolith from his home in San Francisco: like many of his brethren, he’s playing this sort of serious game while living like a virtual recluse, but unlike others he has a dream and a goal, that of one day moving to live on Mars. To him the project is not just a divertissment, but a serious endeavor and one that moved ever closer to reality when the first manned mission landed on the red planet and started setting some permanent presence there.

For this reason, once he detects something troubling on the surface, he wastes no time in checking out the problem and discovering the presence of an injured astronaut whose oxygen and battery power might be depleted before the rescue party can reach her. The race against time and the unforgiving environment of Mars suffers from a false start of sorts because NASA does not look too keen about having a civilian (and what’s basically a nerd, at that) involved in their operations, but Blake’s preparation in the field and the help he can provide soon change their mind, so that the battle for astronaut Kate survival can be engaged with some hope of success.

I enjoyed this story very much, not least because of the suspense created both by the situation and by the nerve-wracking time lag of 8 minutes that makes communications – and commands sent to Feldspar – very difficult in that specific situation.  A story to be fully enjoyed, indeed, so that it’s no surprise that it won the Grand Prize in the Jim Baen Memorial Short Story Award 2017: a well-deserved victory.

8 thoughts on “Short Story Review: FELDSPAR, by Philip A. Kramer”