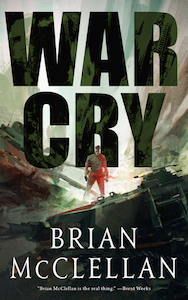 I received this novel from Tor, through NetGalley, in exchange for an honest review: my thanks to both of them for this opportunity.

As a huge admirer of Brian McClellan’s work with the Powder Mages saga, I was more than eager to sample his foray into a different genre, and even though I enjoyed this intriguing novella, I ended up feeling somehow unsatisfied – not because of any negative reaction to story and writing, but because I would have liked to know more, read more about this world.

McClellan is not new to the novella format, and while I found that his shorter writings in the Powder Mage setting filled out the background and added interesting facets to the story and the characters, they worked so well because they were part of a greater whole, one I was already familiar with.  Here the author starts from the other side of the road, giving us a glimpse of a new, different world that simply begs to be expanded and deepened, and that’s the reason War Cry feels somehow… incomplete.

The main character here is a young man, Teado, who grew up during an unspecified conflict that has been going on for years, if not decades: we are not given any detail about the war, or the motivations and identity of the opposed factions, all we know is that the civilization level has a mid-twentieth century flavor, and that there is magic involved in the mix.  Teado, for example, is a Changer – a shapeshifter who can morph into a taloned creature almost impervious to bullets. There are also Smiling Toms, who are able to create illusions either to fool the enemy or to mask one’s own activities; and there is mention of Fire Spitters or Wormers, whose abilities are not actually explained but sound quite intriguing.

Teado’s platoon has been entrenched in its position for quite a while, carrying out guerrilla raids against the enemy, but their meager supplies dwindle and morale gets lower every day: the young man himself often toys with the idea of giving in to the enemy propaganda he listens to on the radio and turning himself over to the other side, since he’s tired and hungry and demoralized – only the thought of leaving his friends and maybe being forced to betray them has stopped him until now.   A risky operation against the enemy base that might offer the platoon the opportunity to resupply and hold on for some more time turns into something else, something that will expose the futility of a long, drawn-out conflict and the grey areas of warfare strategy.

The actual story takes second place to the intriguing background that in some way reminded me of the trench warfare from WW I or the long sieges from WWII, sharing with the latter the perception of technological level and society orientation: in particular the use of propaganda for the extra push on the war effort sounded like something out of the mid-40s’ historical records, and reminded me of the many documentaries on the period that I saw on the History Channel.

Still, it’s all just barely touched on, as is the use of magic: as a reader I kept wondering at the reasons for the war, at the identity of the opposing factions and their goal, and at the appearance of magic and its users in what looks like an alternate version of our own world.  It was slightly frustrating to be offered so many clues but no clear resolution, and I hope that this will not be just an isolated attempt at something different by Brian McClellan, but that it will develop into something more detailed and articulated, because what I saw in War Cry is not enough to satisfy my burning curiosity…