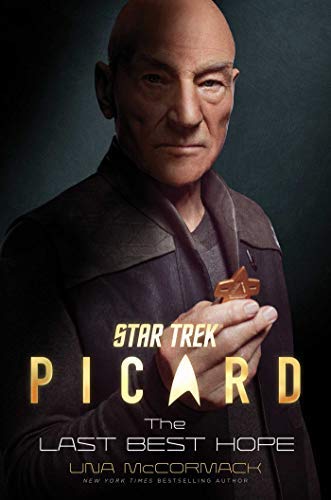 My record with tie-in novels has not been exactly stellar, so far: most of the stories I read gave me the impression that the authors were not overly familiar with the universe and the characters they were dealing with, or that they were doing a paint-by-the-numbers job with little motivation to deliver a gratifying story.  For this reason I approached this novel, that acts as a prequel to the new Trek series Picard, with some hesitation, but to my great relief and appreciation I encountered a solid story whose characters – especially the central one – felt both substantial, well-researched and consistent with their on-screen versions.

The core premise in Gene Roddenberry’s vision of his future was that of a utopian society where greed, bias and bigotry had been erased; a post-scarcity civilization that had relegated poverty and hunger to its remote past; a political association where dialogue and diplomacy could solve the most bitter conflicts.  As every utopian vision it was a worthy, inspiring one – even a model to strive for – but as such it did not take into account the darker side of our nature. The original Trek, and TNG, were the product of times when optimism made us think we could start reaching for that goal, but as society and politics changed over time, the following series started incorporating more and more or this transitioning reality into their background, showing a not-so-perfect Federation, one prone to very human (and I’m using this term broadly speaking) flaws.

This prequel novel moves from the discovery that the greater part of the Romulan Star Empire is destined to be obliterated by a supernova and that Starfleet launches a massive rescue mission to relocate the endangered population to safety. The huge effort is fraught with technical and political difficulties from the very start, and when an act of sabotage destroys the Mars shipyard, Starfleet choses to pull out of the mission, causing Picard to resign his commission in anger and frustration.   This less than flattering view of Starfleet and the Federation has been at the root of many objections moved by a number of fans, so I will start by addressing this narrative angle first.

Roddenberry’s perception of the Federation as a cohesive whole in which everyone worked for the common good always looked more like wishful thinking, and while remaining as a basic guideline for the shaping of mankind’s future society it was not free from exceptions even in the original series, so that we saw several examples of humanity’s worst at play. In this novel, this kind of reality check is brought to the fore on several levels: the widespread reaction at the announcement of the rescue mission for example, with people wondering why so many resources need to be employed to the benefit of a long-standing adversary; scientists dragging their feet at having to put their projects on hold to work on new and more efficient ways to relocate, house and feed so many refugees; politicians using the emergency as a leverage for their own agendas, and so forth.  Does all of this sound quite familiar? Of course it does, because science fiction is often – if not always – a mirror of our present times and issues and it reflects them back at us through the lens of an imagined future. This might not look like the Federation his creator envisioned, but it’s a possible look into what we might become one day, and a prediction that our present “baggages” might still follow us into the centuries to come.

In this rude awakening from the dream of a perfect future, the most excellent victim is Jean-Luc Picard, the very symbol of Roddenberry’s vision: from the very start he’s forced to walk an uphill road, battling against short-sightedness, reluctance to fully commit to the task and political expediency, and despite these difficulties, added to the monumental task of moving 900 million people out of harm’s way, he struggles to keep the optimistic outlook that drove his past missions so far, although day by day that optimism is corroded by the mounting awareness of the hopelessness of it all. Many chapters of this novel start with excerpts from his log, and we can see the slow, inexorable way in which that hope keeps dwindling and is ultimately ground into dust by what he perceives as the ultimate betrayal from the organization he gave his life to.  The ominous quality of the storytelling goes hand in hand with the deconstruction of Picard’s noble, dignified figure as he comes face to face with his powerlessness and starts to turn into the bitter, discouraged person we meet at the start of the TV series, someone whose gaze has turned inward where once he used to look out to the stars.

Picard’s second in command, Raffi Musiker, suffers a similar fate even though she comes from a different outlook: she holds little faith in humanity’s virtue and yet her cynical approach to the obstacles on their path does not save her from the crushing disillusionment they are destined to endure. More than that, she pays a terrible personal price for her dedication to the mission (something we see more clearly on screen), and what we see of her in this novel explains a great deal her attitude in the TV series, because she is forsaken both by Starfleet and by a commanding officer who choses to sever all ties with his past in the aftermath of the tragedy.

Picard: The Last Best Hope is not an easy read, because it will subvert many of the beliefs we held about Starfleet and the Federation; it will lead us to confront some unpleasant realities under the utopian surface we thought we knew; and it will force us to see how complete failure can affect even the most steadfast of personalities. There is a grimness of perspective in this novel that we are not used to seeing in Star Trek, and yet this story is a compelling one – not just because of the background it builds for the TV series, but because it makes us understand that sometimes we need to reach bottom before starting to swim back up to the surface.  Grimdark might have reached its proverbial tentacles into one of the most optimistic franchises in speculative fiction, but I am convinced that redemption will not be out of the characters’ grasp, and I’m waiting to see if I’m right.

19 thoughts on “PICARD: THE LAST BEST HOPE, by Una McCormack”