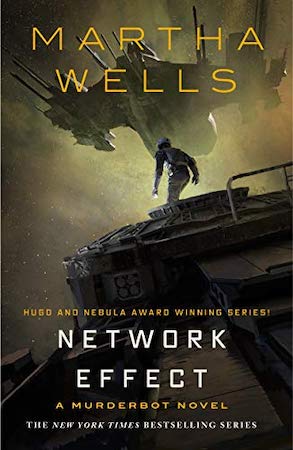 How do I love thee, Murderbot? Let me count the ways…

Network Effect was one of my most anticipated novels for the current year, and it delivered on all fronts: I was of course mildly concerned that the transition from novella size to full-length book might not work as well as expected, but that was not the case. On the contrary I hope that future installments in the saga of our beloved Sec Unit will maintain this trend, making me – and countless other Murderbot fans, I’m sure – quite happy with its continuing adventures.

The story in short: after relocating to Preservation Aux with its former client – and now not-friend – Dr. Mensah and her enlarged family, Murderbot is still trying to balance newfound freedom and the still present threats against Mensah, the last of which left her with some residual PTSD. The colony’s open-minded attitude is in direct antithesis to the corporations-ruled rest of the galaxy, making Sec Unit’s  protection duties even more difficult.  A planetary survey run by some of Mensah’s family members is cut short due to a vicious pirate raid, and as the Preservation ship makes for home they are attacked and captured by a mysterious group based on a vessel that’s an old acquaintance of Murderbot, although it behaves in a strange, disquieting fashion.

What follows is a high-octane adventure where a mystery about alien artifacts mixes with corporate greed, an abandoned colony and some heated battles in space and planetside: to say more would be a huge disservice – this story, like the others preceding it, must be enjoyed with as little prior knowledge as possible. The detail that I can safely share is that, in this case, more is better: the broader narrative space gives us more chances to delve into Murderbot’s psychological makeup, its evolution as a sentient being and the meaning of freedom and choice for artificial intelligences. A coming of age story together with a hero’s journey, told with a satisfying balance between humorous quips and deep introspection.

As usual, the tale is told from Murderbot’s point of view as it struggles to understand the “strange” behavior of its charges, especially when it does not compare with previously recorded experiences or with any kind of human custom learned through the huge amount of media that Sec Unit loves to consume: more than ever before we see how the fictional series it’s addicted to are the bridge between itself and humanity, the key to decipher our puzzling ways, and the means to make itself more like them – although Murderbot would strongly deny that last… In Network Effect media also becomes a sort of liberating factor, the window on a different way of being offered to another Sec Unit as Murderbot presents it with the chance to get rid of its governor module and be something else.

In this respect there are some passages where the whole concept of constructs is brought into the light, and offers a terrible, inhuman vision, made even more so by the apparently dispassionate tone our ‘hero’ employs in all its musings: we know from the very beginning of this saga that Sec Units are composed of mechanical and organic parts (and I for one am quite keen to learn more about how those organic parts are obtained…), and that their main job is to protect the employers from harm, even sacrificing their own existence. The downside comes from the fact that in case of a dire emergency, the Sec Unit is abandoned to its destiny, just like one might abandon an unthinking piece of equipment – it’s such a “fact of life” that it’s also regularly portrayed in the serialized media Murderbot watches, and speaks loudly about the callousness of the corporate world. This might be the main reason Murderbot offers the choice of freedom to Three, as its brethren is designated, because it has realized the cruelty of the laws governing them.

[…] because I was a thing before I was a person and if I’m not careful I could be a thing again.

The same goes for the infamous governor module: it’s not just a control system, it’s also a self-destruct apparatus: when the distance between client and unit exceeds a given limit, for example, it destroys the unit itself.  One of Murderbot’s most chilling reflections, as it contemplates Three’s indecision about employing the hack for the governor module, uses this very example to state how it sees its journey from construct to person:

I love how Murderbot constantly denies its feelings while being literally inundated by them, how it manages to rationalize them to itself while fooling none of its human companions, just as I enjoy their amused conspiracy in allowing it to maintain the fiction: the person who seems to better understand this is young Amena (the best addition to the cast so far), and this shows in her interactions with Murderbot, which are a mix of teenager annoyance and adult empathy, resulting in the most delightful exchanges throughout the book.  I have come to the conclusion that since Sec Unit’s journey toward self-determination is still underway, it can be viewed as a teenager – still unsure of its role in the wider world and still prey to emotional storms – so that only another teenager is the most qualified to get on an equal footing.

Last but not least, Network Effect features the return of a previous character, one whose role was crucial in Murderbot’s transition from its former existence: ART is the cybernetic opposite of Sec Unit in many personality traits, and the two renew here their troubled relationship, complicated by some events that are an integral part of the overall story – they may be at odds, and even quarrel bitterly, but there is a profound, undeniable bond between them that gets delightfully explored in this novel and promises interesting developments for the next installments.  Again, I don’t want to say too much about this part of the story, except that ART’s is a very welcome return and offers new insights into what makes Murderbot tick.

Humans tend to be the “guest stars” in this series, leaving the spotlight to constructs and artificial intelligences, and yet the latter are the ones to offer the deepest and most emotional insights in the overall story. So… please Ms. Wells, can we have more Murderbot soon?

26 thoughts on “NETWORK EFFECT (The Murderbot Diaries #5), by Martha Wells”